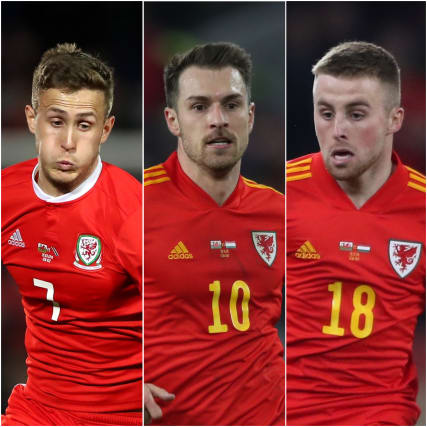 Wales suffered a huge Euro 2020 blow on Saturday when Joe Allen ruptured his Achilles tendon and was ruled out of this summer’s tournament.

The 56-times capped Stoke midfielder was named in the official team of the tournament in France four years ago and is one of the first names on Ryan Giggs’ team sheet, playing in 16 of the Wales manager’s 19 games.

Here, the PA news agency looks at the options to see who might line up alongside Chelsea midfielder Ethan Ampadu in Giggs’ preferred 4-2-3-1 formation.

Pushing Ramsey into a deeper role might seem the most logical decision as Wales are blessed with so many talented forwards. But that would be stymying Wales’ most creative force and the tactic has not worked well in the past. The Juventus midfielder was ineffective in a more withdrawn role during the crucial 2018 World Cup qualifying defeat to the Republic of Ireland when Allen was forced off with a head injury, and also during a Nations League home defeat to Denmark the following year.

The 23-year-old has struggled to make his mark at Bristol City, where he has made only a handful of appearances. But Morrell has blossomed during a loan spell at League One Lincoln and is trusted by Giggs on the international stage. Only made his debut in the September friendly with Belarus but featured in the final four qualifiers and started the last two against Azerbaijan and Hungary. Might be seen as the most natural like-for-like replacement for Allen.

The Cardiff midfielder has had a roller-coaster of a season. Vaulks started just one league game under Neil Warnock after joining from Rotherham last summer and was dragged off after 45 minutes in a 3-0 defeat at Reading. But since Neil Harris’ arrival he has become an integral part of a Cardiff side that has steadily climbed the Championship. Limited impact on the international scene so far but brings energy, tenacity and a long throw that is a considerable attacking weapon.

The Manchester City youngster caught the eye in the early part of Giggs’ reign alongside Allen as Wales beat the Republic of Ireland and Slovakia. Picked up a league winners’ medal on loan as FC Twente won the Dutch second division title. But a loan spell at QPR earlier this season did not work out, and he has made just two substitute appearances since joining Charlton in January. Fallen down the pecking order behind Morrell and Vaulks.

The ball-playing defender is carving out a big reputation at Swansea and has been linked to Premier League champions Manchester City among others. Excelled in his four autumn outings for Wales before undergoing ankle surgery in October. Slotted seamlessly back into the Swansea defence now and Giggs might be reluctant to push him forward into a midfield holding role. But Joe Ledley and Andy King have left the international scene since Euro 2016 and the 22-year-old could provide extra stability there.