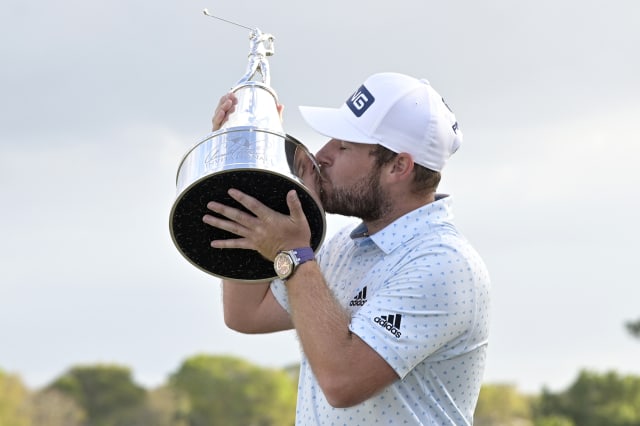 A final round of 74 was enough for Hatton to hold off the challenge of 2017 winner Marc Leishman as gusting winds and firm, fast greens sent scores soaring.

Only four players finished under par and Hatton’s fellow Englishman Matt Fitzpatrick was the only player to break 70 over the weekend with a closing 69.

Such conditions posed a serious test to Hatton’s famous temper but the 28-year-old kept his emotions in check even after a double bogey on the 11th, closing with seven straight pars to earn a valuable three-year exemption on the PGA Tour.

“It was so tough and obviously everyone’s dropping shots quite easily,” Hatton said in his post-round press conference. “And after the double on 11, which was pretty tough to take, I feel like I could easily have blown up after that, and managed to kind of keep my head a little bit, although I did get a bit frustrated.

“That’s always going to happen with me and as long as it’s not kind of keeping on over to the next shot, then I’ll be okay. And I’m just happy that I’ve managed myself well enough this week to be sitting here.

“I think players kind of would look back at this week and say it’s nice to play something different. Most weeks it’s not target golf, but the scores are super low.

“And this ended up sort of feeling like a major (championship) with the set-up and how firm the greens were and it was hard to hit it close. I don’t think there was even a handful of guys that were under par for the weekend.”

Hatton was playing just his second event since undergoing a wrist operation at the end of last season, but now has a three-year exemption on the PGA Tour and is in a strong position in the FedEx Cup standings.

“Coming into this week I didn’t have any exemptions, so when the season starts you are kind of just playing to keep your status for the following year,” Hatton added.

“Obviously I’m trying to juggle both tours, which is never easy and I’m normally playing around 16, 17 events, so that makes things certainly a little bit tougher to try and keep your status over here. A three-year exemption is amazing.”