Leicester hammer Aston Villa with Jamie Vardy back among the goals 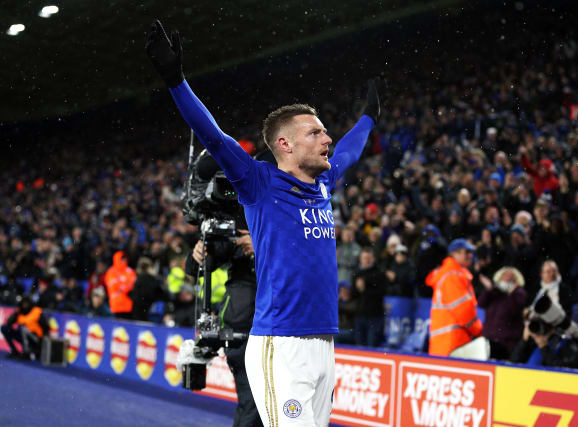 Jamie Vardy and Harvey Barnes each scored twice as Leicester returned to winning ways in the Premier League with a comprehensive 4-0 victory against Aston Villa.

It was also no coincidence that the Foxes’ first league win since January 22 came with Wilfred Ndidi’s return from injury.

Boss Brendan Rodgers had highlighted the defensive midfielder’s absence and his importance to the team in the build-up to the match, and on Monday night it was clear to see why.

On top of Ndidi managing 83 minutes, leaving the field to a standing ovation when substituted with the game already won, Vardy also returned from injury and in doing so ended his nine-game goal drought with a double between Barnes’ two goals.

The win, aided by a disastrous goalkeeping mistake by Villa’s Pepe Reina for the opening goal, saw Leicester open up an eight-point gap over Manchester United in fifth place as Rodgers moved closer to bringing Champions League football back to the King Power Stadium.

For Villa, they were unable to channel their positives from their Carabao Cup final defeat and Dean Smith’s side remain in the relegation zone, two points from safety.

Villa were the first to threaten, winning an early free-kick wide on the left. Conor Hourihane sent in a lovely delivery across the face of Kasper Schmeichel’s goal but Mbwana Samatta was unable to direct the ball on target sliding in at the far post.

Bjorn Engels narrowly avoided scoring an own goal after a mix-up between him and Reina saw the Belgian head the ball past both his goalkeeper and the open goal.

From the resulting corner, Reina kept out Jonny Evans’ header and Barnes nodded the follow up over the crossbar from inside the six-yard box after Evans headed his rebound back across goal.

Shortly afterwards it was Caglar Soyuncu’s turn to miss the target with a header following another corner.

Villa were caught out again from a corner, this time a short one, but the result was the same as this time Kelechi Iheanacho headed the ball wide from Ricardo Pereira’s cross.

Barnes managed to work Reina just after the half-hour mark but it was easy work for the Spaniard to smother a tame effort.

Marc Albrighton did well to pick out Barnes’ run in behind the Villa defence down the left but the Leicester winger still had plenty to do – until Reina decided he could beat Barnes to the ball.

Barnes won the race and poked the ball past the advancing goalkeeper, who was 15 yards outside his penalty area, before maintaining his composure to guide a shot between the covering Tyrone Mings and Matt Targett and into the net.

Reina went a small way towards making amends at the start of the second half when he blocked Iheanacho’s effort when the striker was through on goal.

Leicester had caused Villa problems throughout the first half from set pieces and Evans went close again when he flashed a header wide from James Maddison’s free-kick.

Vardy returned just before the hour, coming on for Iheanacho, and he was involved immediately, stepping up to convert the penalty after Mings was adjudged to have handled Barnes’ cross.

The Villa defender pleaded his innocence, claiming the ball had struck him on the shoulder, but VAR agreed with referee Michael Oliver’s decision to award the spot-kick.

Vardy was on target again with 11 minutes remaining. Barnes picked him out in the box and, when his attempted return was blocked, Vardy reacted quickest to drilled a half-volley passed Reina.

Barnes capped an excellent night with his second goal after 85 minutes, latching on to Marc Albrighton’s pass to take the ball in his stride and score.

The 22-year-old could have had a hat-trick in injury time with a little more composure but snatched at his chance when the ball came across goal, slicing his shot wide.

It would have put the gloss on a great night for Leicester, but Rodgers will still be delighted with what he saw from his team.