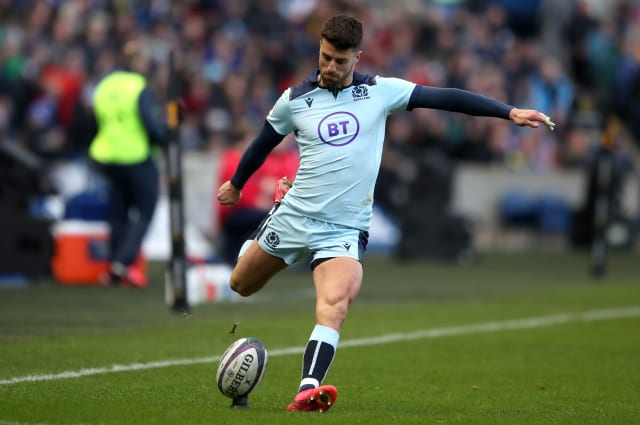 Adam Hastings could not hide his grimace after his parents were caught on the Murryfield kiss-cam – but the Scotland playmaker was all smiles after masterminding victory over France.

A clip showing the Dark Blues ace wincing as his dad, former Scotland star Gavin, and mum Diane puckered in the stands has gone viral, with over 2,300 likes on Twitter.

But thankfully it was the only downer for the Glasgow stand-off on Sunday as Gregor Townsend’s men put on a stunning display to derail Les Bleus’ Grand Slam quest.

Hastings said: “It’s lovely having my parents here, it means a lot to me and them. My mum is my number one fan.

“But yeah, I saw them on the kiss-cam. Hopefully that will be the last of that.

“I was trying to send them a message – I don’t want them necking on national telly.

“I was just pleased with the win. We’ve been a bit stop-start this campaign and it was frustrating.

“But we got a good tough win over Italy and then on Sunday you saw us in full flight, which was really enjoyable.

“We had a good game plan and all felt very strongly about it. We took it to France and stopped them from starting well, which they have done in their three previous games.”

Sean Maitland stole the headlines with two tries in the 28-17 triumph but this was Hastings’ most composed display in a Scotland jersey to date.

He controlled the tempo with a measured range of passing and a kicking game that continues to improve week-by-week.

Forced to step into the breech in the wake of Finn Russell’s much-publicised spat with Townsend, the 23-year-old believes he is now reaping the rewards having started all four of the Scots’ games during this year’s Guinness Six Nations.

“I feel I’ve come on loads during the championships,” he added. “I was disappointed with the Italy game. Personally I felt I was inconsistent there so it was disappointing.

“I had time to let that stew before the France game but I came back and looked to do the simple things and get the job done. I feel like I did just that.

“Is that the biggest day I’ve had in a Scotland jersey? Yeah, I think you’ve hit it bang on the head there.

“It was tough after the Italy game because you’ve won an international but still come away feeling disappointed.

“So this was an important game for me and the team.”

As things stand, Scotland will now head to Cardiff next Saturday for their championship curtain-closer – although the on-going coronavirus threat could yet see the showdown with Wales postponed.

However, the pain of losing to Ireland and England have been soothed by back-to-back wins against Italy and Les Bleus.

But Hastings admits there is a sense of ‘what if’ going into the final week as he recalls the missed opportunities in Dublin and the Calcutta Cup clash with the Auld Enemy.

He said: “It’s been frustrating. We feel like we could almost be sitting here with four wins from four.

“It’s just been so stop-start and we’ve just not got going.

“It’s very pleasing to get the win on Sunday but it does leave you thinking about what could have been. But we’ve got two good wins now and we’ll look to take that momentum into the Wales game next week.”