Wales ready to bounce back against Scotland, says Josh Navidi 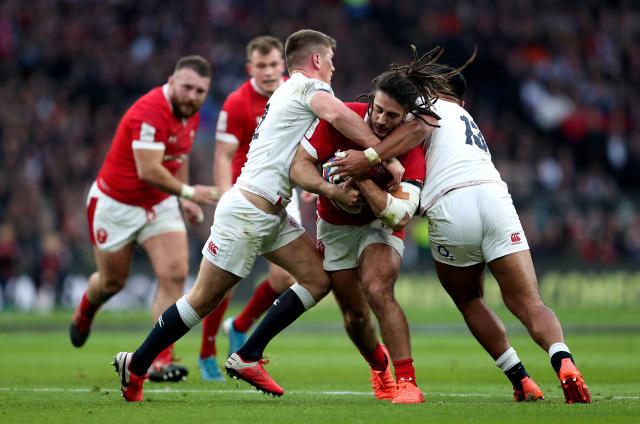 Josh Navidi says Wales will aim to “put the wrongs right” ahead of their Guinness Six Nations finale against Scotland next Saturday.

Wales’ 33-30 defeat to England was their third successive reversal of this season’s tournament and they have not lost four games in one Six Nations campaign since 2007.

Navidi and company, though, will be firm favourites to end on a winning note, given they have not been beaten by the Scots in Cardiff for 18 years.

But there is no disguising a frustrating few weeks for last season’s Six Nations champions that has seen them concede 84 points and 10 tries in losing to Ireland, France and England.

Late touchdowns by Dan Biggar and Justin Tipuric put a gloss on the Twickenham scoreline as England saw a 33-16 lead dwindle during the dying minutes when they were reduced to 13 men after centre Manu Tuilagi was sent off and prop Ellis Genge sin-binned.

It was the first time Wales had scored 30 points at English rugby headquarters – but they also remain without a Six Nations win there since 2012.

And they did not escape injury-free either, with lock Jake Ball probably facing shoulder surgery that could mean him being sidelined for three months, and prop Dillon Lewis suffering an ankle problem.

“We can take some positives, but we have to look back at it and put the wrongs right ready for Scotland next Saturday,” Wales number eight Navidi said.

“Going into the changing rooms (at half-time) we knew it was a big deficit (Wales trailed 20-9), but you never think you are out of the game.

“We are not in a bad place. We are still building, the boys are still getting used to the systems. It was just the first half let us down.

“We can take some positives from that game and just keep moving forward.

“It’s obviously a new (coaching) regime and hopefully we can just keep building.”

Centre Hadleigh Parkes mirrored a sense of frustration in the Wales camp, adding: “Maybe in the middle 20 minutes we gave away silly errors. They got off to a good lead.

“I think the try just after half-time was outstanding, then all of a sudden we probably tried to play from deep a little bit too much and, unfortunately, errors cost us a little bit.

“We are back at home (next Saturday). We don’t like losing at home.

“It’s going to be a tough game against Scotland and we just want to go out there and make sure we finish on a high and put in a good performance in front of our own fans.”

It has been a testing baptism for new Wales boss Wayne Pivac and his coaching staff since succeeding the Warren Gatland regime.

But there were words of encouragement from Pivac’s England counterpart Eddie Jones, who said: “You look at their side – they had 850 caps – so it’s a very mature team.

“Once you get to that many caps, you know there is some regeneration coming.

“That’s the difficult part. The coach has changed and they’ve had a tough Six Nations.

“But, goodness me, if you are a Welsh supporter, you would be pleased with the spirit they showed.

“I thought they were outstanding, and I think Pivac is doing a good job there.”