Serie A schedule thrown into further chaos amid coronavirus outbreak 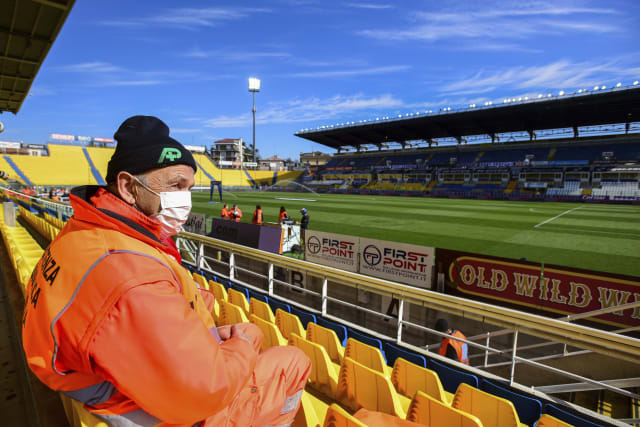 Confusion gripped Serie A on Sunday as over 16 million Italians prepared to go into lockdown in a bid to combat the spread of coronavirus.

Parma's match against SPAL was delayed moments before the scheduled kick-off time after the sports minister requested the league was suspended, according to Italian media reports.

The match eventually kicked off 75 minutes late. All matches in Serie A have been ordered to be played behind closed doors until at least next month.

UEFA says it remains in "constant contact" with regional and international authorities regarding the impact of the Italian lockdown on the respective European campaigns of Inter Milan and Atalanta.

Meanwhile, the sport's European governing body has followed the Premier League's lead by banning pre-match handshakes at all UEFA matches until further notice.

UEFA said in a statement: "This will be applied to all UEFA matches and is in line with recommendations made by the World Health Organisation to minimise potential transmission of Covid-19."

Championship leaders Leeds have announced that their women's team and some of their academy sides will be temporarily moved out of their Thorp Arch training base.

In a statement the club said: "We believe the fact that the facility is shared with our first team leaves us with little choice but to take this action, to protect Marcelo Bielsa's squad from any risk of coming into contact with anyone who has contracted the virus."

This month's Bahrain Grand Prix will take place behind closed doors due to the outbreak, organisers have announced.

The second round of the Formula One season, due to be stage from March 20-22, has become the latest sporting event to close to the public because of the virus.

A statement from race organisers said: "In consultation with our international partners and the Kingdom's national health taskforce, Bahrain has made the decision to hold this year's Bahrain Grand Prix as a participants-only event.

"As an F1 host nation, balancing the welfare of supporters and race goers is a tremendous responsibility.

"Given the continued spread of Covid-19 globally, convening a major sporting event which is open to the public and allows thousands of international travellers and local fans to interact in close proximity would not be the right thing to do at the present time.

"But to ensure that neither the sport, nor its global supporter base, is unduly impacted, the race weekend itself will still go ahead as a televised event."

Bahrain has reported over 60 cases of the coronavirus. Officials said the race would take place amid a series of rigorous sanitation measures in the country, including "social distancing".

The statement added: "Bahrain's own early actions to prevent, identify and isolate cases of individuals with Covid-19 has been extremely successful to date.

"The approach has involved rapid, proactive measures, identifying those affected by the virus, of which the overwhelming majority of cases relate to those travelling into the country by air.

"Aggressive social distancing measures have further increased the effectiveness of preventing the virus' spread, something that would clearly be near impossible to maintain were the race to have proceeded as originally planned.

"We know how disappointed many will be by this news, especially for those planning to travel to the event, which has become a cornerstone event of the international F1 calendar, but safety has to remain our utmost priority."

Bahrain's decision is the latest setback to the Formula One calendar after the Chinese Grand Prix, scheduled to take place in Shanghai in April, was postponed indefinitely last month.

Meanwhile Italian team Ferrari say they remain in close contact with the authorities in light of the increasing restrictions on movement in the country.

"Following measures announced by the Italian Government last night, we are monitoring and evaluating the situation and are in close contact with the relevant authorities and all organisations involved," a statement said.

"For Ferrari, compliance with the Government regulations represents the primary guarantee for ensuring the safety of its employees and their families which is our priority. Every single decision will be made with respect to this principle.

"Part of the team and equipment have already arrived in Melbourne and the departures for the remaining members of the team are going ahead as programmed unless we receive communications to the contrary."

The Cofidis and Groupama-FDJ cycling teams have both announced they have been released from 10 days of quarantine in the wake of the abandoned UAE Tour and are heading home.