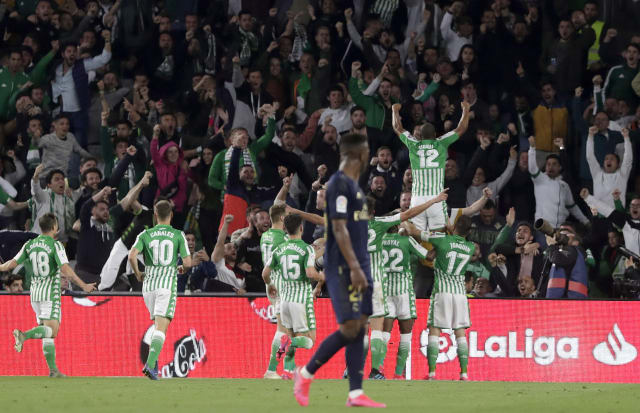 Real Madrid captain Sergio Ramos insists his side will “come back stronger” after their shock 2-1 defeat at Real Betis.

Los Blancos missed the chance to leapfrog Barcelona back to the top of LaLiga after losing three of their last four games in all competitions.

Ramos, quoted on Real’s official website, said: “There are 11 games to go and many points still to play for. If we want to be champions, we can’t let opportunities pass us by.

“We know this is a tough place to come against a good side. We’ll reflect on it to come back stronger.”

Zinedine Zidane’s side trail Barcelona by two points and next face relegation battlers Eibar on Friday at the Bernabeu.

Real have now lost two of their last three league games, but bounced back from a 1-0 loss at Levante and their home Champions League defeat to Manchester City by beating Barcelona to go top last week.

Ramos added: “Just like we didn’t lose our heads over last week’s three points against Barcelona, we can’t get too worked up about this either.

“The result (against Betis) is quite fair, we have to look at ourselves. We haven’t been good today. But there’s a lot still to play for in LaLiga.”

Betis secured their first league win in seven matches and only their second of the year to climb eight points clear of the bottom three.

Match-winner Tello, a second-half substitute for Betis skipper Joaquin, said victory was a huge boost for the club and their fans.

“We came into the game in a bad way in terms of wins and beating a team like Real Madrid in front of our fans is a proud moment for us,” Tello, quoted in Marca, told a post-match press conference.

Betis play at high-flying local rivals Sevilla next Sunday and Tello added: “We’re going into it with lots of confidence.

“The team needed a win like this and it gives us lots of confidence to go to Sevilla’s stadium and really leave our mark.”