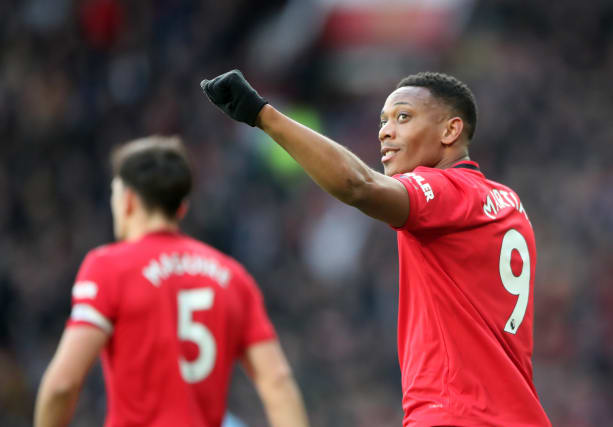 Here, the PA news agency picks out some of the main talking points from the latest round of Premier League fixtures.

Manchester United boosted their hopes of Champions League qualification by completing a first league double over neighbours Manchester City since the retirement of Sir Alex Ferguson. Errors in either half from City goalkeeper Ederson allowed Anthony Martial and Scott McTominay to end United’s decade-long wait to take six points from their local rivals. The 2-0 home win was a first top-flight loss at Old Trafford for City boss Pep Guardiola and kept the hosts within touching distance of fourth-placed Chelsea. Runaway leaders Liverpool, who bounced back from losing their lengthy unbeaten record by beating Bournemouth on Saturday, also benefited from the result. Jurgen Klopp’s men ended the weekend 25 points clear of second-placed City and just two wins from a first title in 30 years.

Ancelotti was last weekend shown a red card after being left fuming by a disallowed goal against Manchester United. The Italian, who was fined but avoided a touchline ban, had further reason for anger on his first return to Stamford Bridge since being sacked by Chelsea in 2011. His sloppy Everton side paid the price for a slow start and were thrashed 4-0 by his former team, who handed a full Premier League debut to 18-year-old Billy Gilmour. Scottish midfielder Gilmour, who impressed in the midweek FA Cup victory over Liverpool, marked the occasion with another assured performance to enhance the top-four aspirations of Frank Lampard’s Blues and inflict the joint heaviest league defeat of Ancelotti’s distinguished managerial career.

Ndombele has failed to light up the Premier League since his £54million summer arrival from Lyon and could now be battling to save his Tottenham career. The 23-year-old was hauled off at half-time during Spurs’ 1-1 draw at Burnley and later singled out for criticism by unimpressed manager Mourinho, who claimed his team “didn’t have a midfield” in the first half. Many pundits expressed surprise at the public nature of the dressing down. Under-performing France international Ndombele, signed during the reign of Mauricio Pochettino, must significantly improve to win around Mourinho, justify his hefty transfer fee, and prove he has a future in north London.

With Euro 2020 on the horizon, Sheffield United goalkeeper Dean Henderson further underlined his international credentials with a superb triple save to secure his side’s 1-0 win over bottom club Norwich. Jordan Pickford’s position as England number one has come under increasing scrutiny following a string of errors and Blades boss Chris Wilder expects Manchester United loanee Henderson to win his first Three Lions cap later this month. The in-form 22-year-old now has 10 Premier League clean sheets for the season, one behind fellow England candidate Nick Pope, while only table-topping Liverpool have conceded fewer goals than the South Yorkshire side.

Beleaguered Brighton yet to break 2020 duck

Brighton picked up a battling point at high-flying Wolves on Saturday but, alarmingly, remain the only team in the top four divisions without a win this calendar year. Albion have plummeted into serious relegation danger having accumulated the fewest top-flight points during that time (8), while only Norwich and Newcastle have managed fewer goals. The struggling Seagulls must quickly rediscover the form which prompted the club to extend head coach Graham Potter’s contract to 2025. Their next five fixtures include clashes with Arsenal, Manchester United, Liverpool and Manchester City – a daunting run which could potentially leave them in a perilous position.