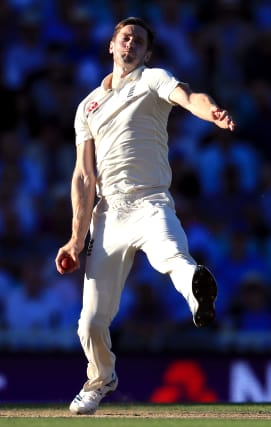 Chris Woakes and Matt Parkinson took two wickets each as England’s bowlers got their first taste of Sri Lankan conditions in Katunayake.

Having posted 316 on day one against an SLC Board XI, Joe Root’s side had the hosts 184 for six at tea.

Woakes was arguably the pick of the bowlers on a surface that continued to offer interest to the seamers, claiming the first wicket of the day when opener Lahiru Udara top-edged a pull to mid-on and returning in the afternoon session to see off Priyamal Perera.

The Warwickshire bowler, who this week informed Delhi Capitals of his withdrawal from the Indian Premier League to focus on his international duties, also created two chances at slip only for Root to drop both.

Parkinson, the uncapped Lancashire leg-spinner who is likely to provide cover for Dom Bess and Jack Leach providing the latter’s calf injury improves ahead of the first Test, also had some success.

His wickets came in successive deliveries but were split by the lunch break, Lahiru Milantha chipping to extra cover before the break and captain Milinda Siriwardana falling to the first ball of the afternoon session.

Parkinson’s county team-mate Saqib Mahmood caught both but will be even happier with his own efforts with the ball. He was the quickest bowler on show and well deserved the scalp of top-scorer Ashan Priyanjan with the last ball before tea.

Priyanjan, who has 26 white-ball caps for Sri Lanka, made a composed 77 before being hurried on the pull by Mahmood and picking out mid-wicket.

Bess came on in just the seventh over of the day and got through 12 overs for figures of one for 43.