Dele Alli: Spurs can’t rely on talent alone – we have to fight 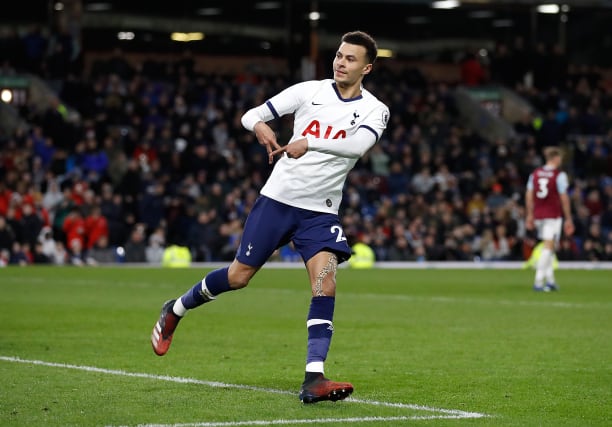 Dele Alli believes there is no shortage of talent in Tottenham’s dressing room but has called on his team-mates to “work hard and fight” in the closing stages of the season.

Spurs thrashed Burnley 5-0 in north London only three months ago but were thoroughly outclassed for the first 45 minutes at Turf Moor, where the Clarets should have had more than Chris Wood’s goal to show for their efforts.

The home side had to settle for a 1-1 draw after Alli scored his 50th Premier League goal from the penalty spot, having take on the responsibility because of injuries to strikers Harry Kane and Son Heung-min.

The duo’s absence in recent weeks has coincided with a slump in form for Jose Mourinho’s side, but they sparked into life after the interval on Saturday evening thanks to the introductions of Giovani Lo Celso and Lucas Moura.

Alli therefore knows the personnel available to Mourinho is not the problem after Tottenham avoided a third successive top-flight defeat.

But he told Tottenham’s official website: “Talent isn’t going to get you the three points and push you over the line.

“When you’re in the Premier League at this stage everyone’s fighting and working hard, we have to match that and have the same fight and enthusiasm.

“You have to be switched on throughout the whole game, your talent isn’t going to be enough, you have to work hard and fight. We did in that in the second half and it was disappointing not to get the three points in the end.

“We can’t hide, there’s no hiding in the Premier League, the stats and the table are out there for everyone to see. As well as we play in some games, we’re not getting over the line.

“I think we’ve shown the character we’ve had in this squad throughout the years we’ve been together. This is a very tough period for us in terms of results but I believe we can turn it around.”

Alli became the seventh Tottenham player to reach 50 Premier League goals and only Harry Kane reached the milestone at a younger age.

The England midfielder, though, took little solace from that, adding: “It’s a good achievement but it’s hard to think of it in a positive way when we didn’t win the game.

“I’m obviously happy to be scoring but I would trade the goal for the three points.”

Burnley extended their unbeaten sequence to seven matches ahead of next week’s trip to Manchester City.

Wood, who marked his first start in three weeks with a goal following a hamstring complaint, said on Burnley’s official website: “We feel good. We just want to keep that run going.

“It’s a big one next week, which is going to be tough, but I don’t see why we can’t go there full of confidence.

“We’ve got on a good run at a good time and we’ve got some good games ahead to hopefully keep it going and we can continue to look up.”