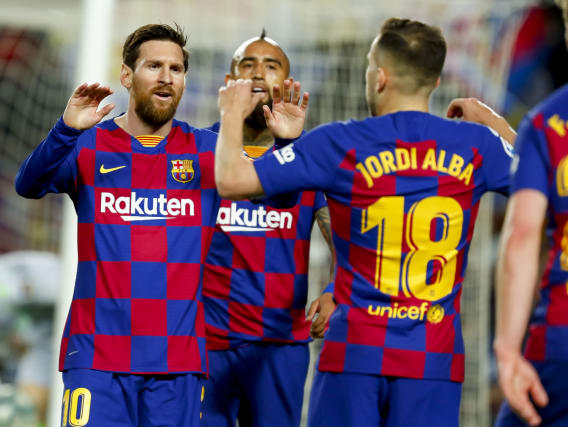 Barcelona coach Quique Setien felt his side deserved credit for coming through “a tremendously complicated game” with a 1-0 win over Real Sociedad following a late penalty given on VAR review.

The spotlight was back on Setien in the fall-out from last weekend’s El Clasico defeat to Real Madrid.

After a largely frustrating evening at the Nou Camp against the Copa Del Rey finalists, Barca eventually found a breakthrough when Sociedad defender Robin Le Normand was penalised for an inadvertent handball as he dived to clear a cross.

Lionel Messi kept his cool from the spot with 10 minutes left to give the home fans something to cheer, protests again having been made against club president Josep Bartomeu with the waving of white handkerchiefs.

“We knew it was going to be a tremendously complicated game. They had six straight wins, one at the Bernabeu, and are in the final of the cup,” Setien said at his post-match press conference.

“Apart from in some phases, the game was controlled. We did have difficult times but we also created danger.

“We have won thanks to the VAR. From the bench, I did not see it as it was too far away.”

During stoppage time, Jordi Alba had an effort on the break ruled out by VAR for an offside in the build-up.

Setien’s side moved two points in front of their title rivals, who travel to Real Betis on Sunday.

“How I see it is that we are well and strong mentally, that is what interests me,” said the Barcelona boss, who replaced Ernesto Valverde during January.

“We have overcome a complicated game. Now Real Madrid must win theirs tomorrow.”

Sociedad boss Imanol Alguacil felt his side had deserved to leave the Nou Camp with at least a point.

“For the boldness and what my team did on the field, we deserved at least a draw,” he said at a press conference, reported by Spanish media outlet AS.

“We made a great effort, proved to be in a good moment and we had a very competitive team.

“We did a great job and if Barcelona were not at a great level it is because we did many things well.

“There are times when you get hurt, but in this defeat I am happy, proud and satisfied.”

On the penalty call, Alguacil refused to criticise the officials.

He said: “I respect the referees to the fullest, sometimes the decisions benefit (your team) and sometimes not. If he has called it (a penalty), it is because he has seen it.”