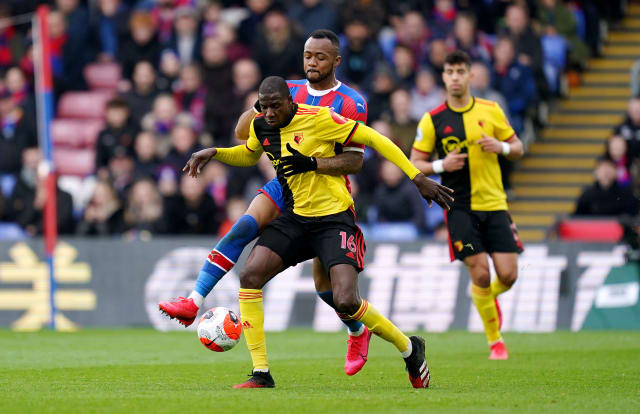 Crystal Palace brought Watford back down to earth with a 1-0 win at Selhurst Park a week after the Hornets had stunned Premier League leaders Liverpool.

Jordan Ayew’s 28th-minute goal settled this fiery contest to move the Eagles onto 39 points – one off the magic total which usually guarantees top flight survival – and toast Roy Hodgson’s new contract with a victory.

Despite enjoying plenty of possession, Nigel Pearson saw his side suffer a disappointing defeat which has them only outside the relegation zone on goal difference.

While there were no pre-game handshakes between the players due to coronavirus fears, tackles were allowed and Cheikhou Kouyate felt the full force of Adam Masina’s boot early on.

The Hornets, fresh from their stunning 3-0 triumph over champions-elect Liverpool, started strongest and went close on more than one occasion in the 13th minute.

First Abdoulaye Doucoure dribbled into the area and tested Vicente Guaita from a tight angle and then Ismaila Sarr’s follow-up strike was deflected wide for a corner.

Palace’s Spainish goalkeeper had to deal with the resulting set-piece, but his punch was poor and the ball dropped invitingly for Christian Kabasele, though his weak effort was blocked by Joel Ward.

Watford were dictating, with the hosts uncharacteristically sloppy on the ball and Hodgson’s frustration on the touchline was visible.

That all changed in the 28th minute when Palace produced their first meaningful attack and went ahead through Ayew’s eighth goal of the term.

After netting the winner at rivals Brighton last weekend, the Ghanaian rifled home from 20-yards this time after Wilfried Zaha, Christian Benteke and James McArthur had combined impressively.

It was now Watford who lacked composure, with Kiko Femenia booked soon after for a foul on Zaha and the scrappy nature of the opening exchanges returned with Zaha cautioned for pulling back Etienne Capoue in the 41st minute.

The Ivorian’s history with the Hornets was well documented and the rivalry between the two teams had grown since their meeting in the Championship play-off final in 2013, which was decided by a penalty won by the winger.

The second half was only three minutes old when the Capoue and Zaha feud continued, with the former bringing down the Palace man.

As referee Anthony Taylor tried to restore order, the Watford midfielder lowered his head into the face of the Eagles number 11, who reacted by pushing Capoue’s head away. VAR reviewed the the incident, but deemed neither violent conduct.

Cautions were being handed out regularly now, but the focus was back on football when Zaha was denied by Ben Foster’s legs in the 56th minute.

Down the other end, Roberto Pereyra had a weak shot saved by Guaita after Scott Dann blocked Troy Deeney’s goalbound effort.

The Hornets captain was denied an equaliser with 65 on the clock, when the Palace custodian produced a wonderful finger-tip save.

Guaita was at it again three minutes later to thwart Doucoure’s header and although Pearson introduced Danny Welbeck and Ignacio Pussetto with 16 minutes left, the hosts held on for a third consecutive 1-0 victory.