Liverpool back on track after Bournemouth scare at Anfield 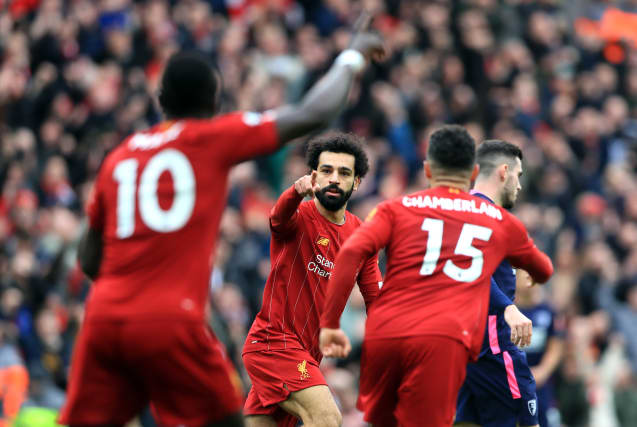 Liverpool returned to winning ways after coming from behind to beat struggling Bournemouth 2-1.

The Reds moved to within three wins of claiming a first league title in 30 years after passing another test of character as Mohamed Salah and Sadio Mane netted.

Callum Wilson had fired Bournemouth in to a ninth-minute lead at Anfield before Salah became the first Liverpool player since Michael Owen to score 20-plus goals in three successive seasons.

Mane’s coolly-taken effort condemned Bournemouth to a fourth league game without a win, as Liverpool ended a run of three defeats in four matches in all competitions.

Matt Ritchie then had a first-half penalty for Newcastle saved by Alex McCarthy after Sofiane Boufal handled in the box.

The visitors finally made the breakthrough at St Mary’s 11 minutes from time when Saint-Maximin slotted past McCarthy.

Alexandre Lacazette came off the bench to earn Arsenal a win over a West Ham side who spurned several chances to leave the Emirates Stadium with three vital points.

The Hammers had won only one of the last eight Premier League meetings between the two sides and created the better opportunities of a game settled by Lacazette – who hit the only goal of the 1-0 win as VAR intervened after the effort had originally been ruled out for offside.

Home is certainly where the heart is for Lacazette, reduced to the role of substitute in recent weeks, as all seven of his league goals this season have come in front of his own fans.

Michail Antonio fluffed his lines on a couple of occasions while Jarrod Bowen hit the frame of the goal as the side David Moyes retained following the win over Southampton looked to spring a surprise.

Ultimately it would be Arsenal, who took a while to warm up in north London, who would claim the win to move Mikel Arteta’s side within three points of fifth-place.

Billy Sharp scored the only goal of the game as Sheffield United pushed Norwich closer to an immediate return to the Championship, with the Blades’ 1-0 win at Bramall Lane leaving them two points off fourth place.

Jordan Ayew scored the winner for the second week running to give Crystal Palace a 1-0 win over Watford and Wolves and Brighton drew 0-0 at Molineux.