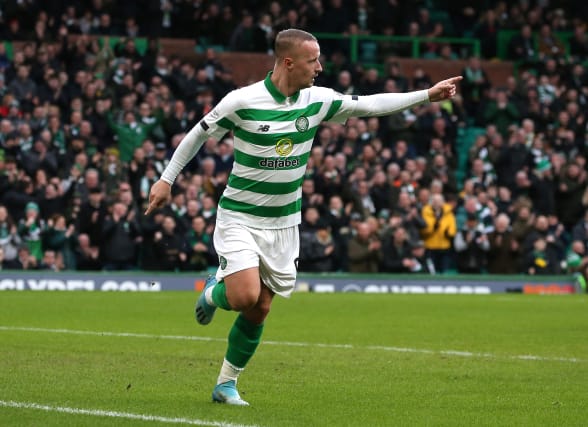 A Leigh Griffiths hat-trick helped Celtic to a thumping 5-0 win over St Mirren at Parkhead and confirmed his return to form ahead of Scotland’s crunch Euro 2020 semi-final play-off.

The Hoops striker is keen to get back into Steve Clarke’s set-up for the game against Israel at Hampden Park later in the month.

Two well-taken goals before the break had the Ladbrokes Premiership leaders on easy street and his third in the second-half, after strike partner Odsonne Edouard had notched in the 54th minute, had him surely back on the international radar.

Callum McGregor scored from the spot in the 90th minute and with eight games remaining, the league leaders remain unbeaten domestically in 2020 and are now 16 points ahead of Rangers who have two games in hand, the first of which is at Ross County on Sunday, but that seems almost academic as Neil Lennon’s side show no signs of faltering.

Griffiths came in to partner Edouard, a pairing would dominate the afternoon, while midfielder Tom Rogic was rewarded for his late equaliser against Livingston in midweek with a start at the expense of Ryan Christie.

Saints boss Jim Goodwin made three changes to his side, with midfielder Cameron MacPherson and attackers Tony Andreu and Junior Morais named up front.

There was no whirlwind start by the home side.

St Mirren slowly played themselves into the game and midfielder Cameron MacPherson’s free-kick from 25 yards forced Hoops keeper Fraser Forster to make a save down at his left-hand post.

However, the hosts took the lead in the 18th minute in simple style.

Edouard’s cross into the box from the left found Griffiths all alone and the 29-year-old Scotland forward confidently swept the ball low past Vaclav Hladky from five yards, with the Paisley side looking in vain for the offside flag.

The goal relaxed the league leaders.

Edouard’s curling shot from the edge of the box was punched away by Hladky and he then saved a header from wing-back James Forrest at point-blank range before clutching a left-footed drive from the Scotland winger.

Hladky then denied Rogic but just before the break the midfielder was key to Celtic’s second goal.

After Griffiths took a pass from Nir Bitton at the edge of the box, he played a clever one-two with the Australia midfielder before flicking the ball past Hladky and in off the post.

Griffiths went all out for his hat-trick after the break, coming close when his drive from 25 yards was tipped past the post by Hladky.

However, the over-worked Buddies keeper had no chance when Edouard, shadowed by Sam Foley and Jamie McGrath, took a pass from Griffiths inside the box before turning and driving low into the corner of the net for his 28th goal of the season.

Griffiths’ third came in the 74th minute when he drilled a shot in from just outside the box for his first hat-trick since January 2016, in an 8-1 win over Hamilton.

A couple of late efforts from Andreu and MacPherson bore no fruit for the visitors before Foley was judged by referee Gavin Duncan to have tripped Celtic substitute Hatem Abd Elhamed, on for Kristoffer Ajer, in the box and McGregor blasted in the penalty.