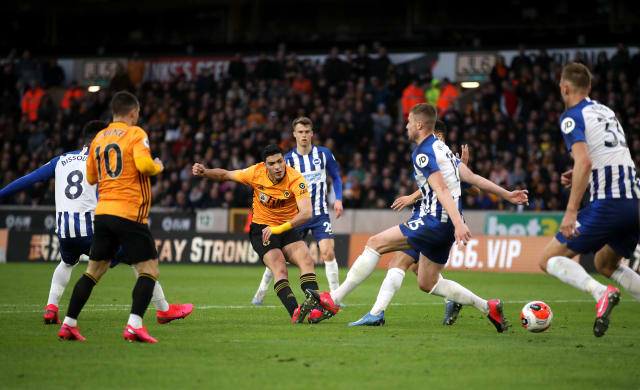 Boss Graham Potter insisted Brighton must be humble enough to accept their point at Wolves.

The Seagulls moved two points clear of the Premier League’s bottom three after a gutsy 0-0 draw at Molineux on Saturday.

It was their first clean sheet since December – the last time they won a game against Bournemouth.

Brighton nullified sluggish Wolves – who missed the chance to break into the top four – despite extending their winless run to 10 games, leaving Potter pleased.

He said: “Over the course of the game we deserved the point. It’s a point at a team chasing the top six and we have to be humble enough to accept that as well.

“Our performance was such we could see the moments out, so the home team couldn’t get the momentum they wanted. That’s credit to the players, they worked hard.

“They had one chance at the end but it was a bit of a tactical battle. (Adama) Traore coming on made things even more challenging but overall we did well.

“We didn’t come and park the bus or sit back. We took part in the game and had a good understanding of what we had to do.

“We tried to play so it was a really positive performance away from home. We’d like three points but we move forward in a good way.”

Wolves’ top four hopes suffered a blow and they have now played a game more than Manchester United and Chelsea.

Leander Dendoncker wasted their best chance late on when he fired over, while Solly March blazed over in Brighton’s only serious opening.

But despite missing the chance to crack the top four boss Nuno Espirito Santo denied it was on his mind.

“We’re not disappointed about that, we didn’t perform well or like we wanted to,” he said. “It’s you speaking about the rest. We are game-by-game.

“Now we must analyse and improve for the next one because Thursday (at Olympiacos in the Europa League) we have a big challenge in front of us.

“It’s about what we wanted to do. We expected this kind of game and we must find balanced situations, mainly in our wide areas.

“It’s not about getting used to it (being frustrated at home), we know our opponents, we should have done better. Thursday is another challenge and it’s always the same process.”