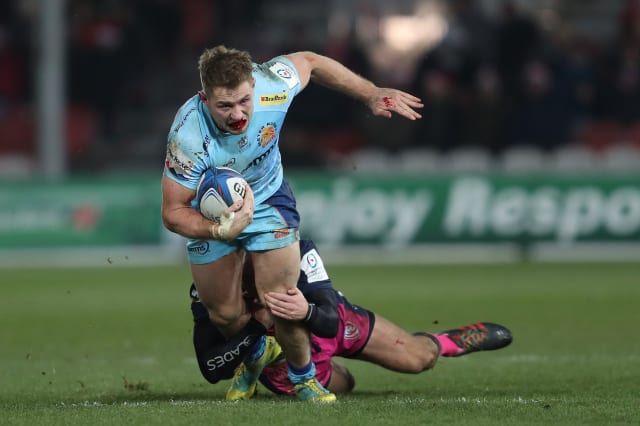 Exeter moved back to the Gallagher Premiership summit after a first-half blitz saw them claim a 57-20 bonus point hammering of Bath.

But the damage was done from a poor Bath first-half effort was punished ruthlessly by Exeter, with the Chiefs 29-3 up at half-time and with a try bonus point already in the bag.

When threatened, particularly in the last moments of the half, Exeter’s defence stood solid as Bath tried in vain to extract a try for a foothold in the match.

The Chiefs could have been fired up after losing to Harlequins the previous weekend and began the onslaught when a solid scrum five under the Bath posts in the sixth minute saw scrum-half Nic White send a wide ball right for O’Flaherty to stroll into the corner.

Priestland booted a penalty for Bath but the storm was about to break. Woodburn nearly scored from an Ian Whitten grubber to the right corner but would not be denied and grabbed Exeter’s second when centre Tom Hendrickson broke through the middle and fed the winger for an easy run-in.

Joe Simmonds increased the lead to 15-3 with a penalty and, as Bath struggled to get any possession, number eight Sam Simmonds got the third touchdown, breaking around the blindside from an attacking line-out maul.

Bath lost lock Josh McNally to the sin-bin for a high tackle, and Exeter’s bonus point try was not long coming from there as Kirsten drove over from a ruck two metres out.

Simmonds converted three of the tries against the wind, and, 57 seconds after the re-start, was kicking another two points after brother Sam went under the posts for his second try.

Bath finally found a way to break the home defence and, from a run penalty under the Exeter posts, Mercer scored.

It was countered, though, moments later as the Chiefs again reached the Bath try-line, this time for Taione to wriggle over.

Again, however, Bath scored when Wright went over from 10 metres, with Priestland’s replacement Freddie Burns adding the extras.

And McConnochie made the score respectable with Bath’s third, picking up on a dropped ball on the Exeter 22.

But Exeter were not finished as Woodburn got his second and Maunder dashed over for their eighth try, finishing the rout.