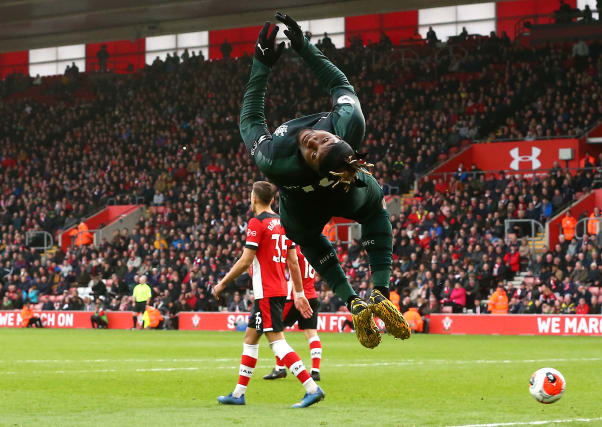 Southampton goalkeeper Alex McCarthy pulled off a number of stunning saves but was not able to rescue a point for his side as they were beaten 1-0 by Newcastle.

McCarthy gave his hopes of an England recall a boost as Allan Saint-Maximin’s second-half strike secured all three points for Steve Bruce’s men over 10-man Southampton at St Mary’s.

Newcastle had failed to score in their last four top-flight outings, but Saint-Maximin’s 79th-minute goal ended the goal drought as Newcastle moved eight points clear of the drop zone.

The result has come at Southampton’s expense however, as the Magpies climbed above their opponents to 13th in the table.

The hosts fought to keep the scores level after Moussa Djenpro’s red card in the 28th minute, with McCarthy making some crucial saves including one from a Matt Ritchie penalty.

The Saints stopper had already denied Dwight Gayle and Miguel Almiron twice in the opening 10 minutes in an impressive triple save.

Djenepo, returning to the side following a family bereavement, lasted just 28 minutes before being sent off for a challenge on Isaac Hayden.

The 21-year-old winger’s tackle was reckless and he was deservedly shown a red card after referee Graham Scott consulted the pitch-side monitor before changing his initial decision from yellow to red.

Minutes after finding themselves with a man-advantage, McCarthy made another point-blank save to deny Gayle, with the forward putting another opportunity wide of the goal shortly after.

Despite having a one-man advantage, Newcastle struggled to convert their chances, and missed a penalty just before the half-time whistle after VAR ruled Sofiane Boufal had handled in the box.

McCarthy guessed correctly and dived down to his left to keep the score level and deny former Portsmouth midfielder Matt Ritchie from giving Newastle the lead.

The intensity which encompassed Steve Bruce’s side’s first-half performance was somewhat lacking for much of the second half.

However, with just over 10 minutes remaining in the match, Saint-Maximin won the ball on the right side of the pitch before running towards goal and putting the ball past McCarthy as Newcastle found the benefit of the numerical advantage to return to the north east with all three points.