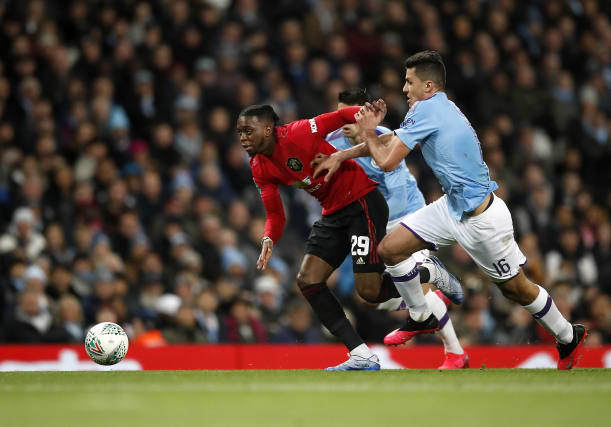 A first Premier League title since 2013 may be out of the question, but United face bottom side Norwich in the FA Cup quarter-finals and Austrian league leaders LASK in the last 16 of the Europa League.

That is as a result of the club’s longest unbeaten run of the season – nine games – ahead of Sunday’s Manchester derby as the battle for a top-four finish intensifies.

“I think we’re in a better position than when I joined,” Wan-Bissaka told the club’s official matchday programme United Review.

“We didn’t start off great at first, not as the club is expected to do, so I think we’re moving in the right direction now. I’m very excited by the future. I think we’re getting closer to reaching our target.

“I came to this club to win trophies and I know that this team is capable of winning trophies. I think it’s a process. We’re going in the right direction and that’s what we’re aiming for.”

United won both the League Cup and Europa League under Jose Mourinho in 2017 and Wan-Bissaka believes a first trophy under manager Ole Gunnar Solskjaer could be an important milestone.

“I think that will help a lot, getting our hands on the first trophy,” added the former Crystal Palace defender.

Wan-Bissaka will hope to shake off a knock in time to take his place in the starting XI against Pep Guardiola’s side at Old Trafford, the 22-year-old having missed training this week.

Centre-half Harry Maguire is rated “touch and go” to be fit after rolling his ankle in training on the eve of the FA Cup tie with Derby and missing the win at Pride Park.