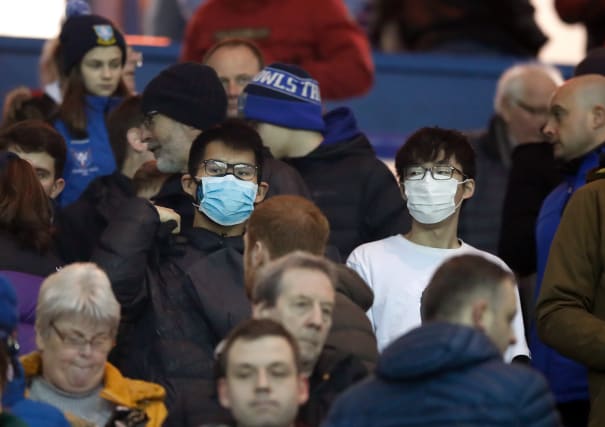 Sports governing bodies and broadcasters have been called to a government meeting on Monday to discuss how to deal with the impact the coronavirus outbreak could have on the sporting calendar, the PA news agency understands.

The meeting is part of the government’s long-term contingency planning and will cover various possibilities, such as holding events behind closed doors, should the virus continue to spread and gatherings of large numbers of people are banned.

It will be hosted by the Department for Digital, Culture, Media and Sport on Monday morning.

The authorities in Italy have already introduced a ban on mass gatherings which has hit sports events and Newcastle head coach Steve Bruce fears it is “pretty inevitable” Premier League games will be played behind closed doors as a result of the outbreak.

He said at his pre-match press conference on Friday: “It’s hard to imagine, isn’t it? But obviously, they’re doing it now in Italy and it’s something we’re probably going to face.. people’s lives are at stake and we’ve got to go by the authorities. But it looks pretty inevitable that could be on the cards.”

Tottenham boss Jose Mourinho added: “Maybe Steve has some information that I don’t have. I don’t know anything about it. I will do what I am told to do. If I have to play behind closed doors I will, if I have to stop playing I will. I am just a football man – I do what I am told.”

All Serie A games in Italy will be played behind closed doors for the next month, while Italy’s Six Nations matches against Ireland and England have been postponed.

Doncaster said: “We are taking a pragmatic approach to the current situation and have alerted our members to the fact that, if the outbreak affects the first team of even one SPFL club, it could make completing the SPFL season very difficult, so first-team players and staff should be extremely vigilant.”

Liverpool have announced a raft of measures, including a decision not to use on-pitch mascots at games, aimed at protecting staff and spectators, and the Premier League and English Football League have both abandoned the traditional pre-match handshake until further notice.

However, Scotland’s chief medical officer has insisted scientific evidence suggests mass gatherings, particularly those held outdoors, are unlikely to result in the virus being passed on.

Speaking at Murrayfield ahead of Scotland’s Six Nations clash with France, Dr Catherine Calderwood said: “I’ve looked at the scientific evidence very carefully, and what’s emerging is that there’s actually very little impact on virus spread from mass gatherings, particularly if they are in the open air. This is not a risk to the Scottish population in hosting this match.”

Meanwhile, Public Health England criticised England’s decision to stand Mako Vunipola down from their match against Wales as a precautionary measure against the virus.

Vunipola was withdrawn from Eddie Jones’ squad after travelling back from Tonga via Hong Kong. He then began training with his club Saracens and has been selected to start against Leicester on Saturday.

“PHE current guidance on coronavirus is clear on when self-isolation is necessary,” a PHE tweet said.

“Earlier this week the RFU asked a player, having returned from travel overseas, to not attend the camp to avoid the risk of spread, which was not necessary as he was not displaying any symptoms. The RFU accept this and this clarification.”

Friday night’s PRO14 fixture between Dragons and Italy’s Benetton went ahead as planned, while officials insist Barcelona’s Champions League clash with Napoli on March 18 is not at risk.

Ajax’s assistant coach Christian Poulsen and two other members of their coaching staff have been told to stay at home after attending a birthday party on Friday with someone who has since tested positive for Covid-19.

Golf continues to be badly affected, with next week’s European Tour event in Nairobi and the Asian Tour’s Royal’s Cup 2020 in Thailand being postponed indefinitely.

The Rugby Football League has advised clubs “there is presently no rationale to close or cancel sporting events in this country – although clearly this may change as the situation evolves”.

In cycling, the CCC and Astana Pro teams have followed Team Ineos and Mitchelton-Scott in withdrawing from races, and both the Tirrenco-Adriatico and Milan-San Remo races have been postponed.

Organisers of the Paris Marathon have announced the race, due to be held on April 5, has been rescheduled for October 18, and the Rome Marathon, due to take place on March 29, has been cancelled.

South Africa have confirmed their cricket tour of India will go ahead as scheduled following a formal risk assessment.