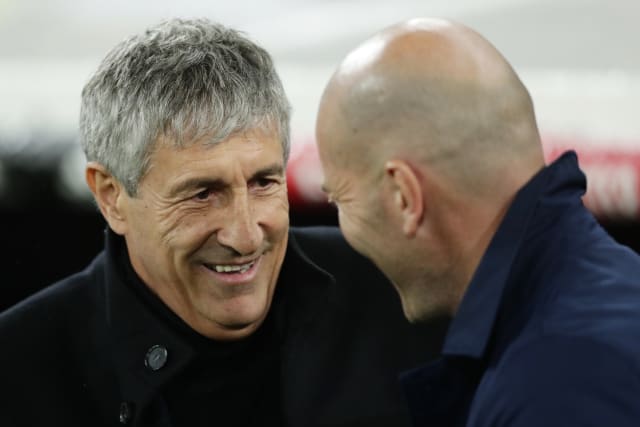 Quique Setien insists he has full control of the Barcelona dressing room after a difficult week for the Catalan giants.

A report in the Catalan press following last weekend’s 2-0 El Clasico defeat to Real Madrid – which saw their great rivals hurdle them at the top of La Liga – said Setien had lost support of the squad.

Subsequent reports have suggested that some squad members have opposed Setien’s call to make a number of changes to training and the playing style deployed by his predecessor Ernesto Valverde.

But Setien, speaking at his pre-match press conference for Saturday’s home league game against Real Sociedad, said: “I don’t know what the basis is for saying we don’t have control of the dressing room.

“We are delighted with the dressing room we have found here. There are no problems.

“I thought it would be more difficult than it is. The players accept everything (asked of them) with an extraordinary attitude.

“Some (players) are convinced (by you) quicker, others can take longer. That’s part of life and my job: earning their confidence and transmitting to them that my knowledge can help.

“Everything happening is normal and maybe you (the media) are looking for more than there is, but there’s nothing there.”

Adding to a troubled week, Setien apologised for the behaviour of his assistant Eder Sarabia at the Bernabeu on Sunday.

Sarabia was roundly criticised for an expletive-laden outburst during the game, where he was seen recriminating some of the Barcelona players.

“The only thing he did wrong, which I didn’t like, was the way in which he expressed himself,” Setien said.

“I love the character and the temperament he has, that doesn’t worry me. What concerns me is the way it was done.

“We have apologised (to the club and the players) for a series of words that should not be used when you represent a club like this.

“We are obliged to manage the way we do things because there are many kids watching us, so we have to be careful.”

Barcelona, who trail Real Madrid by one point with 12 games remaining, are without Arthur on Saturday.

“I am calm because I know that we are going to face the game having got over the (Real Madrid) defeat,” Setien said.

“Of course defeats are always painful, especially at this club, but there’s always a chance (you lose).

“The players are really happy with a lot of things from the Bernabeu, we created seven chances and had four clear chances in the first half.

“We have to pick ourselves up and move forward.”

Real Sociedad are on a high having beat Mirandes on Wednesday to reach the Copa del Rey final, where they will meet Basque rivals Athletic Bilbao.

But sixth-placed Sociedad have an abysmal record at the Camp Nou, failing to pick up a single point there for 25 years.

“It’s going to be difficult because, if it’s been so many years,” head coach Imanol Alguacil said at his pre-match press conference.

“But we have been close to getting something positive there (in the past).

“In the form we are in (six straight wins), we believe that we can get something, although we know the strength of the opponent.

“If, like in the last two years, we are able to make Leo (Messi) appear as little as possible because, if we do that, we will be closer to getting something positive.”