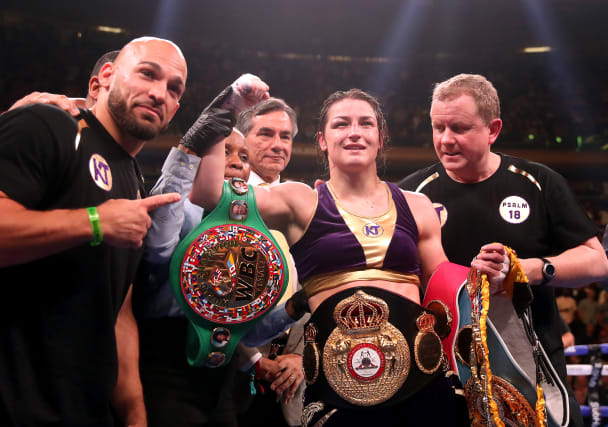 Katie Taylor will put her status as undisputed lightweight champion on the line when she takes on the decorated Amanda Serrano in a much-anticipated bout at the Manchester Arena on May 2.

The Irish fighter will return to 135lbs to defend her WBC, WBA, IBF and WBO crowns against Serrano, a New York-based Puerto Rican who has won world titles in seven weight categories.

Taylor became a two-division world champion last November when she earned a unanimous decision win over Christina Linardatou for the WBO light-welterweight title, which extended her unbeaten professional record to 15-0 (6KOs).

Last June, Taylor claimed a razor-thin points win over Delfine Persoon to become the unquestioned ruler at lightweight, but a contest against Serrano represents arguably the toughest test of her career.

“It’s a fight that seems to have been talked about for years so I’m just glad it’s finally on,” Taylor said of a clash that will be on the same bill as Dillian Whyte’s heavyweight bout against Alexander Povetkin.

“It’s a massive fight and one that I have been looking forward to for a long, long time.

“I’ve been working hard in training camp in the US since the start of the year so it’s great have a date to focus on now and I can’t wait for May 2.”

“I’m happy we finally got this big fight made because both myself and Katie deserve to be in this position,” Serrano said. “While our fight could have been a main event, I’m still grateful it’s happening.

“I’m not going to talk down to Katie, as I know she won’t to me, so I’ll leave it at this: one thing that’s for sure is that we’ll both leave it all in the ring.”

Taylor’s promoter Eddie Hearn added: “Katie Taylor versus Amanda Serrano for the undisputed lightweight championship of the world – this is the biggest women’s fight of all time.

“The whole of Ireland and Puerto Rico are going to be watching this absolute war between the undisputed champion and the seven-weight division champion – it doesn’t get any bigger!”