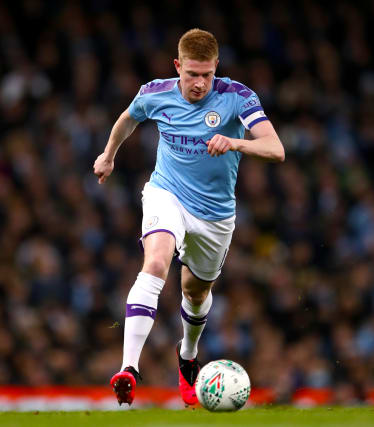 Kevin De Bruyne remains a doubt for Manchester City’s derby clash with rivals United this weekend, although he is “getting better”.

The City playmaker missed the midweek FA Cup tie at Sheffield Wednesday after falling awkwardly on his shoulder in the latter stages of the Carabao Cup final at Wembley last weekend.

Manager Pep Guardiola says the 28-year-old has not yet been ruled out of Sunday’s Premier League trip to Old Trafford but he will need to be assessed.

Guardiola said: “He’s getting better. Today we didn’t train, tomorrow he will improve. I spoke with the physio this morning and he said he feels better. It’s not perfect but he’s better, so we’ll see.”

Fifth-placed United have beaten City twice this season, both times at the Etihad Stadium in the league and in the Carabao Cup.

That will give them confidence heading into an important game for them in their pursuit of Champions League qualification.

With City comfortable in second and 15 points ahead of their rivals there seems to be less pressure on them than United, but Guardiola insists the game is just as important for his side.

He said: “When we believe it’s more important for them than us we are going to lose the game.

“I’ve never played a game thinking about how many points we have or if I have three or four more points, or if it is comfortable or less comfortable. Every game we try to play we try to win.”

Guardiola believes Ole Gunnar Solskjaer’s United, buoyed by the form of new signing Bruno Fernandes, are currently producing some of their best football of the season.

He said: “I said the last time we played against them in the Carabao Cup that from what I saw, in videos and in the game, that the payers follow him absolutely.

“With the commitment they have they are getting better. Right now is maybe their best moment of the season.

“Always I believe that Man United are a strong team and playing good. I always have a great respect and good opinion of Man Utd.”

City also go into the game in good spirits after five wins in all competitions since their winter break, a sequence that includes a Champions League clash with Real Madrid and the Carabao Cup final.

Guardiola said: “Winning two titles so important for us at this stage. Of course winning games and titles helps for our mood and confidence, but in general this season we’ve played good.

“It’s been a good month. Our level, the way we played was good. Maybe players know now is the end of the season and every game counts a lot, especially the knockout games.”

Liverpool manager Jurgen Klopp has criticised United for their defensive approach against his side this season, but Guardiola is expecting something different from them.

He said: “For me it doesn’t look like that. When I saw the last games they were incredibly aggressive and in Old Trafford that will happen.”