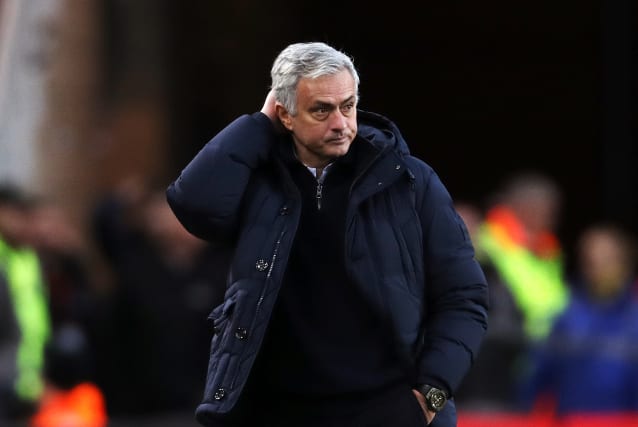 Jose Mourinho knows he has to use the summer transfer window to ensure Tottenham do not suffer the same problems as this season.

Spurs have been hit by major injury issues throughout the campaign, but the combined absence of forwards Harry Kane and Son Heung-min has highlighted the imbalance in their squad.

Dele Alli, Steven Bergwijn, Lucas Moura and Giovani Lo Celso have all had to pick up the slack and as a result are suffering from fatigue.

Such are their lack of options Mourinho had claimed he would have to prioritise either their game at Burnley on Saturday or Tuesday’s Champions League clash at RB Leipzig.

He has since backed down but is not prepared to find himself in a similar position next term.

He said: “We know that we have to build a squad more balanced for next season, because we don’t believe that the same situation is going to happen but in football anything is possible and you have to be ready to cope with these unpredictable things.

“Obviously people are tired of listening to it, but the run of injuries this club had this season, starting with Hugo (Lloris) and ending with Sonny, is something really crazy.

“But again we have to prepare ourselves for something similar to happen again and we have to build a squad that protects against this kind of situation.

“But I believe that any club that loses four fundamental players at the same time, doesn’t matter the squad you have, any team would always feel a situation like this.”

Such problems have led Spurs to surrender a winning position a number of times in recent weeks, a trait that is not common for a Mourinho team.

“Do you want an example? Arjen Robben on the bench (at Chelsea). And (Damien) Duff and Joe Cole playing. Or vice-versa.

“Minute 70 and one goes out, the other one goes in. You know what the defenders of the opposition do? ‘Oh f***’. It’s exactly that.

“We have the squad for that. Imagine my team playing – Lucas, Kane and Son. And Lucas and Son, minute 70 they are tired. Let’s go (Erik) Lamela and (Steven) Bergwijn.

“We have a squad for that. It’s not like I’m saying our squad is not good. The squad is good.

“In this moment we are in trouble. It’s so simple as that.