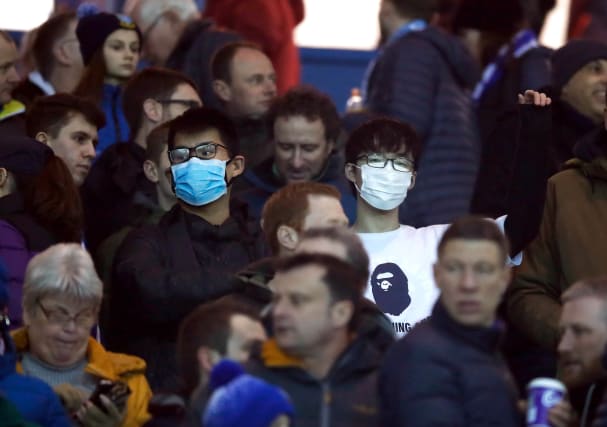 Newcastle head coach Steve Bruce fears it is "pretty inevitable" that Premier League games will be played behind closed doors as a result of the coronavirus outbreak.

The authorities in Italy have introduced a ban on mass gatherings which has hit sports events, and Bruce believes it is only a matter of time before the same happens in the UK.

Bruce's fears followed a warning by the Scottish Professional Football League's chief executive Neil Doncaster that the continuing spread of the virus could make the Scottish football season "very difficult" to complete.

Speaking at his pre-match press conference on Friday morning, Bruce said: "It's hard to imagine, isn't it? But obviously, they're doing it now in Italy and it's something we're probably going to face. We all know football is a way out for everybody, but people's lives are at stake and we've got to go by the authorities.

"But it looks pretty inevitable that could be on the cards."

All Serie A games will be played behind closed doors for the next month, while Italy's Guinness Six Nations matches against Ireland and England have been postponed until later in the year.

Doncaster said: "We are taking a pragmatic approach to the current situation and have alerted our members to the fact that, if the outbreak affects the first team of even one SPFL club, it could make completing the SPFL season very difficult, so first-team players and staff should be extremely vigilant."

Premier League leaders Liverpool have announced a raft of measures, including a decision not to use on-pitch mascots at games, aimed at protecting staff and spectators.

In addition, the Premier League said it has abandoned its traditional fair play handshake before matches until further notice on medical advice.

The English Football League, meanwhile, will stay in close contact with the Government regarding the ongoing concerns posed by coronavirus.

However, Scotland's chief medical officer has insisted scientific evidence suggests mass gatherings, particularly those held outdoors, are unlikely to result in the virus being passed on.

Speaking at Murrayfield ahead of Scotland's Six Nations clash with France, Dr Catherine Calderwood said: "I've looked at the scientific evidence very carefully, and what's emerging is that there's actually very little impact on virus spread from mass gatherings, particularly if they are in the open air. This is not a risk to the Scottish population in hosting this match."

Friday night's Guinness PRO14 fixture between Dragons and Italian club Benetton will go ahead as planned, while officials insist Barcelona's Champions League clash with Napoli on March 18 is not at risk.

Ajax assistant coach Christian Poulsen and two other members of the Dutch club's coaching staff have been told to stay at home after attending a birthday party on Friday with someone who has since tested positive for Covid-19.

Poulsen, exercise physiologist Alessandro Schoenmaker and an unnamed physiotherapist are in isolation and club spokesperson Miel Brinkhuis told Dutch newspaper De Telegraaf: "It is true that there are three preventative employees at home. The trio have no complaints."

Golf continues to be badly affected by the spread of the virus, with next week's European Tour event in Nairobi and the Asian Tour's Royal's Cup 2020 in Thailand being postponed indefinitely.

The Rugby Football League has advised clubs "there is presently no rationale to close or cancel sporting events in this country – although clearly this may change as the situation evolves".

In cycling, the CCC and Astana Pro teams have followed Team Ineos and Mitchelton-Scott in withdrawing from races due to coronavirus, and both the Tirrenco-Adriatico and Milan-San Remo races have been postponed to a later date.

Organisers of the Paris Marathon have announced the race, due to be held on April 5, has been postponed and rescheduled for October 18, and the Rome Marathon, due to take place on March 29, has been cancelled altogether.