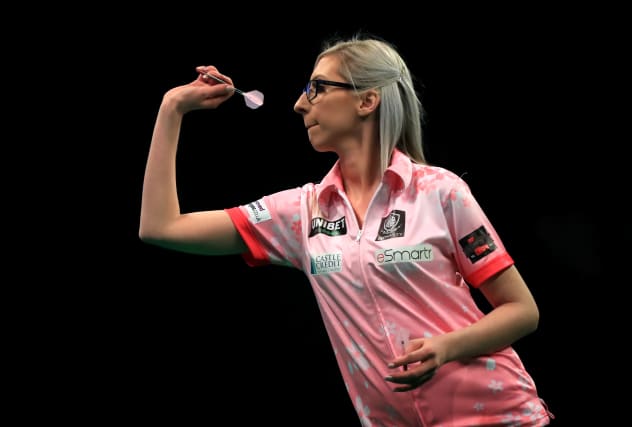 Fallon Sherrock and Lisa Ashton both suffered first-round exits from the UK Open at Minehead.

Sherrock made history by becoming the first woman to win at the PDC World Championships last December, where she knocked out Ted Evetts and Mensur Suljovic, and has also competed in this year’s Premier League.

However, Northern Ireland’s Kyle McKinstry – who reached the quarter-final of the 2019 BDO World Championship – showed little sign of letting the occasion get to him as he broke Sherrock’s throw early on to move 3-0 ahead.

The 25-year-old from Milton Keynes, who came through qualifying to reach the UK Open main draw, took out 36 to get her first leg on the board, which lifted the Minehead crowd.

McKinstry, though, remained clinical on his own finishes, going around the board to move 4-1 ahead.

The Village Man continued an impressive display when capitalising on Sherrock missing two doubles to take out 112 and move within one leg of victory.

McKinstry wrapped up a place in round two with a stunning 128 check-out – finishing on the bullseye – to end Sherrock’s hopes at the first hurdle to deliver a 6-1 victory.

Earlier, Ashton had opened the afternoon session on the main stage, but was beaten 6-2 by Mike De Decker.

Ashton had qualified automatically for the event through her PDC tour card, but soon trailed 3-0 as the Belgian produced some consistent scoring and finishes.

A double 12 saw Ashton get a leg on the board before De Decker then moved 4-2 in front.

Ashton hit her first maximum in the next leg but De Decker took out double 16 to move within sight of victory, which he delivered by landing double top.

The former World Youth Champion was due to enter at the fourth-round stage after establishing himself in the world’s top 32.

World number one Michael Van Gerwen beat defending champion Nathan Aspinall 10-8 in the fourth round to end his poor run at Minehead.

Van Gerwen averaged an impressive 105.5 to claim his first win in the event since taking the title in 2016.

Gerwyn Price and Peter Wright also progressed with respective wins over Danny Noppert and Glen Durrant, while Gary Anderson made it into the last 32 by avenging his 2019 defeat to Steve Beaton.

McKinstry battled through to Saturday’s schedule with a 10-8 win over Bradley Brooks in the evening session.