5 Premier League talking points ahead of this weekend’s fixtures 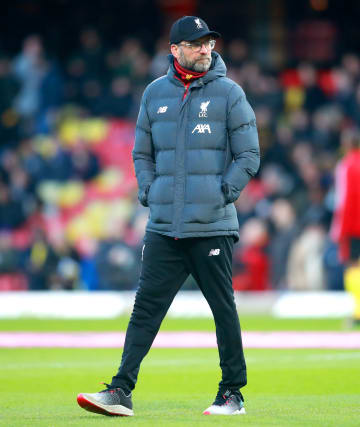 All 20 Premier League clubs will be involved in fixtures this weekend with stories and intrigue at both ends of the table.

Liverpool need only four wins to claim their first title in 30 years while the battle to avoid the drop is hotting up.

Here, the PA news agency takes a look at some of the key talking points heading into the games.

Can Liverpool recover from bump in the road?

Jurgen Klopp’s Reds have a 22-point buffer at the top of the table but hopes of an unbeaten season were ended with a shock defeat at Watford last time out.

The Hornets ran roughshod over a Liverpool side that had not lost a league game since January 2019 and deservedly won 3-0.

Having then crashed out of the FA Cup at Chelsea, Liverpool host Bournemouth in Saturday’s early kick-off looking to get back to winning ways.

Reigning champions Manchester City are the closest side to runaway leaders Liverpool and won their third Carabao Cup in a row last weekend.

They return to league action against local rivals Manchester United on Sunday, with recent history firmly in favour of Pep Guardiola’s men.

City will make the short hop to the Old Trafford knowing that six of the last seven Manchester derbies have been won by the away side – with United’s last home victory in the fixture coming in October 2016.

The Canaries then went on to knock Tottenham out of the FA Cup on penalties but, despite their fine week, Norwich still remain odds-on favourites for the drop.

They are rooted to the foot of the table and are six points adrift from safety, with a tricky trip to Sheffield United next up as they look to make it three wins in eight days – but they head to Bramall Lane with confidence.

Will Jose focus on Burnley clash or have his eye on Champions League challenge?

Tottenham’s FA Cup defeat to Norwich means they have now lost their last four games across all competitions.

Manager Jose Mourinho said after the game that he would speak to his superiors and decide whether to prioritise Saturday’s Premier League trip to Burnley or the second leg of their Champions League round of 16 tie away at RB Liepzig, having lost the first leg 1-0.

With a number of injuries and fatigue setting into his squad, the starting XI named at Turf Moor will give an indication where Tottenham’s priorities lie this season.

Even a victory for Norwich would not be enough to take them off the foot of the table – but above them there are five teams separated by just three points.

Nineteenth-placed Aston Villa play last when they travel to Leicester on Monday night and they will be hoping results go their way to give them a chance of moving out of the relegation zone.

Bournemouth, Watford and West Ham are all tied on 27 points and face Liverpool, Crystal Palace and Arsenal, respectively while Brighton, a point further clear, are at Wolves.