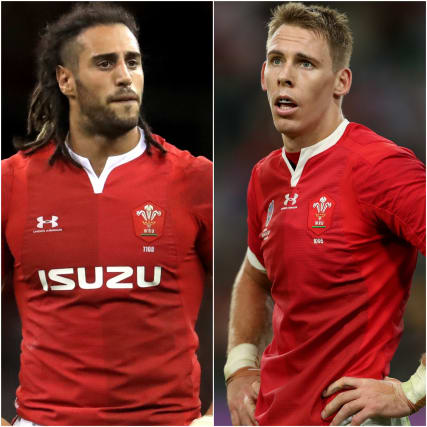 Back-row forward Navidi last featured on the pitch in mid-January before a subsequent hamstring issue laid him low.

But both players will start at Twickenham, with Williams replacing an injured Josh Adams and Navidi preferred to 75 times-capped number eight Taulupe Faletau, who is on the bench.

“The key was to get enough volume into them,” said Pivac, who has also called up scrum-half Tomos Williams instead of Gareth Davies and selected prop Rob Evans over Wyn Jones.

“We’ve done that, and we think they are both ready to go. They’ve put in a lot of hard work to get to the start line this weekend.

“They are both very experienced players and they know their bodies as well as anyone. We are confident they can do a job for us.”

Wing George North and fly-half Dan Biggar, meanwhile, are both fit and retain their places following Wales’ defeat against France 12 days ago.

North failed a head injury assessment during that game, but he has passed all return-to-play protocols and also been independently assessed by a concussion expert.

Biggar has recovered after going off with a knee injury in his club Northampton’s loss to Saracens last weekend.

Reflecting on the changes to his pack, Pivac added: “Wyn has had all the starts so far. He’s had a hip flexor (problem) and he hasn’t trained for about 10 days, and that has counted against him.

“Rob had a pretty good experience against England in the Six Nations last year, and he is chomping at the bit for an opportunity.

“Taulupe started on Sunday (for Bath against Bristol) and hasn’t trained fully until today. That has counted against him. He took a bump in the game on Sunday.

“That’s just one of the downsides to guys playing outside of Wales, having to play on a Sunday before a Test match.

“We think it’s better this weekend for him to come off the bench and have a smaller part in the game.”

Wales last beat England in the Six Nations at Twickenham eight years ago, and defeat on Saturday would make it three successive losses in one tournament for the first time since 2007.

It is also the first occasion that new Wales supremo Pivac will have opposed England head coach Eddie Jones in the international arena.

“He is a fantastic coach,” Pivac said. “His track record speaks for itself.

“We’ve prepared as well as we can. We’ve got a good side taking the field.

“We are going there to try and improve each week, improve on the French performance which, apart from the scoreline, we did well in most areas of the game.

“I thought they (England) were very impressive against Ireland. Very impressive. They controlled that game from start to finish, dominating in virtually all areas.

“They wouldn’t have been happy with that first half against France, but since then, there was a bit of weather in Edinburgh which made it difficult.

“But judging them on that Ireland game, this is going to be a big task.”