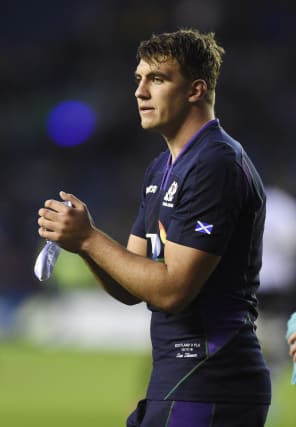 Scotland lock Sam Skinner has vowed to make the most of his Guinness Six Nations chance as he aims to leave his World Cup heartache behind.

The big Exeter forward was certain to be one of the first names down for a seat on the plane to Japan last autumn after impressing during his first six Test appearances for Gregor Townsend’s side.

But the 25-year-old ended up being left behind after suffering a hamstring injury in warm-up win over France just a week before Townsend named his final squad.

It was a bitter blow but Skinner has now finally recovered and is aiming on taking out his frustrations against Les Bleus, who bring the latest stage of their Grand Slam quest to Murrayfield on Sunday.

“I’m thrilled to be back in,” said Skinner. “I love being back with the guys and I’m ready to get stuck in.

“Missing out on the World Cup was difficult to take at the time. I think my family ended up saving some money on a nice camper van rather than going to Japan as a silver lining.

“It was a long seven months in the end and it was a tough period. But I’ve worked on some things away from rugby and I’ve enjoyed the process, so I’m just happy to be back.

“It’s gutting at the time, though. You take a short period to feel sorry for yourself but you can’t take the highs too high and the lows too low. It was just kind of keep cracking on and enjoying it.

“I wanted the boys to do as well as possible and like most Scotland fans I was on the edge of my seat most of the time. I watched, supported and I was gutted when we couldn’t quite make it through.

“What can you do? Life chucks some things in the way, but you’ve just got to crack on. I’m just grateful to have the opportunity to come back in now.

“I’m really excited to be back with the guys and it’s a refreshing start for me.

“You can’t take anything for granted, this week is going to be an incredible game and I can’t wait to get stuck in.”

Instead of drowning his sorrows during his lay-off, Skinner revealed he plunged his focus into a cider company set up with his Chiefs team-mates as he sought a distraction from his injury pain.

But there will be no lingering doubts over his hamstring injuries as he makes his return to Murrayfield.

“I’m involved with a cider down in Devon, it’s all for charity – for Wooden Spoon and the Exeter Foundation,” he explained.

“It’s called Rib Tickler Cider – seven of us down at Exeter have produced it and are selling it down there and it’s gone really well. It’s fun to get stuck into something like that. Trying to broaden your horizons and learning about the business side of things.

“It doesn’t mask over the frustration but it gives you a different focus. It allows you to take a breather from the days in rehab.

“Sometimes it can get on top of you a bit so to get that break and step away from the game is really important.

“The target for me was always to get back for the start of the Six Nations. I wanted to play for Exeter first, cement my spot with them.

“Hamstrings are tricky injuries, it’s been a tough road but I’ve had a few games under my belt now and I’m enjoying feeling myself again and I’m feeling much more confident back out on the pitch.

“My last game for Scotland was against France as well. I think it will be relief and sheer excitement, it’s an incredible place to play.

“I was speaking with my family and I just thought how lucky we are to get another opportunity to make some memories at Murrayfield. I can’t wait.”