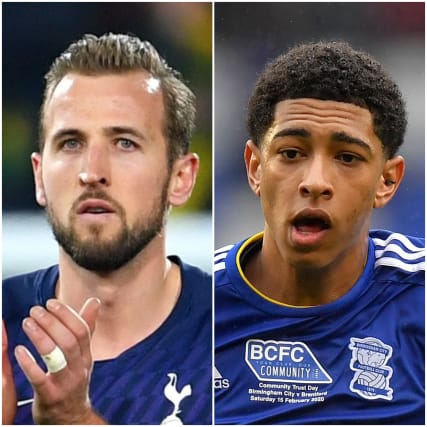 Harry Kane‘s future at Tottenham has become more uncertain with the Daily Express reporting the forward is not planning to sign a new deal in north London. The news comes amid another report that Kane is considering moving to Old Trafford at the end of the season. The England captain, 26, has been hesitant to sign a new deal with Tottenham as he reportedly does not want to wait for Jose Mourinho to overhaul Spurs’ squad.

United are one of the clubs interested in Birmingham midfielder Jude Bellingham. But The Daily Telegraph reports German giants Borussia Dortmund are confident they will sign the 16-year-old in the summer. The Bundesliga side have not hesitated in giving first-team experience to youngsters including England winger Jadon Sancho, 19, which may tempt Bellingham.

Guinea and Olympiacos player Mady Camara is being considered as an midfield option by Arsenal. The Daily Star, which cites Greece’s Sdna, says the Gunners may have lost to Olympiacos but Arsenal manager Mikel Arteta was so impressed with Camara he asked for detailed reports on the 23-year-old ahead of the summer window.

Chelsea will have to come up with £40million if they want to sign Alex Telles as a replacement for Marcos Alonso, according to The Sun. Previous attempts to lure the Brazil left-back, 27, from Porto to Stamford Bridge have failed, but the Blues may move with greater desperation if Alonso leaves for Inter Milan as rumoured. Porto will be looking to get maximum financial return on the Brazilian, whose current deal ends in 2021, amid interest from Chelsea and Leicester.

John Stones: The England defender, 25, could be poached from Manchester City by Arsenal, according to 90 Min.

Willian: The 31-year-old Brazilian forward will reject a new contract with Chelsea and is considering a move to Tottenham, UOL reports.