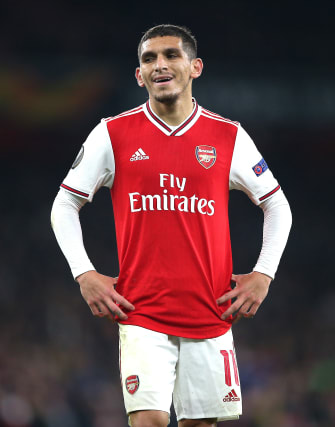 The Uruguay midfielder was taken off on a stretcher early on during the 2-0 victory and was later seen leaving Fratton Park on crutches.

The club have not given a return date, with the 24-year-old set for further specialist reviews.

Torreira was replaced by Dani Ceballos just 16 minutes into the cup tie, which Arsenal went on to win courtesy of goals from Sokratis Papastathopoulos and Eddie Nketiah.

The former Sampdoria man had not previously started for the Gunners since the 2-2 Premier League draw at Chelsea on January 21 but was left injured after a challenge by Portsmouth defender James Bolton, which referee Mike Dean deemed to be a fair one.

Torreira is now set for a spell on the sidelines, although there was better news for full-back Kieran Tierney as Arsenal announced he is back in full training having dislocated his shoulder in December.

Meanwhile, Sead Kolasinac’s shoulder injury is likely to keep him out until the end of the month, while January loan signing Cedric Soares will require another week before being able to return to full training as the Portugal international waits to make his Arsenal debut.

The likes of Bernd Leno, Pierre-Emerick Aubameyang and Hector Bellerin are all expected to return to the side having been rested for the cup win at Pompey.