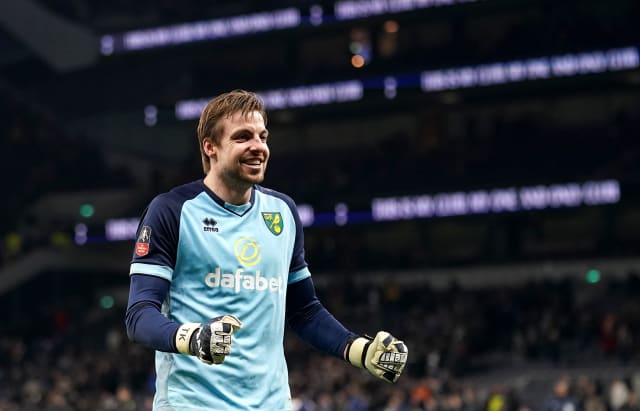 Dutch goalkeeper Tim Krul proved the Norwich hero with two saves as the Canaries beat Tottenham on penalties to book their place in the quarter-finals of the FA Cup.

Jan Vertonghen had earlier put Spurs in front on 13 minutes with a towering header at the back post from Giovani Lo Celso’s curled free-kick across the penalty area.

Norwich – who are bottom of the Premier League and six points adrift of safety – mounted a spirited second-half display.

The Canaries were rewarded with an equaliser on 78 minutes when Josip Drmic bundled the ball in after Spurs goalkeeper Michel Vorm had spilled a long-range effort from Kenny McLean.

Spurs boss Jose Mourinho sent on teenage Republic of Ireland forward Troy Parrott towards the end of the first period, but neither side could find a breakthrough.

In the penalty shoot-out, Vorm redeemed himself with an early stop from McLean only for Erik Lamela to hit the crossbar.

It was Krul, though, who took centre stage as he saved from Parrott and, after Todd Cantwell had coolly converted, the Dutchman kept out Gedson Fernandes’ effort as Norwich won the shoot-out 3-2.

The draw for the quarter-finals was made while the tie at the Tottenham Hotspur Stadium was heading into extra-time.

Norwich’s reward will be a home fixture against either Derby or Manchester United, who play on Thursday night.

Earlier, Sergio Aguero had fired holders Manchester City into the quarter-finals with a 1-0 win at Sheffield Wednesday.

City – who lifted the Carabao Cup with victory over Aston Villa at Wembley on Sunday – will be away at Newcastle in last eight.

After a low-key opening at Hillsborough, it was the Premier League side who broke the deadlock early in the second half.

Owls substitute Steven Fletcher just failed to connect at the far post with a low cross through the City penalty area as the Sky Bet Championship side saw their cup run come to an end.

Leicester beat Birmingham 1-0 with a late goal at the King Power Stadium to book their place in the quarter-finals, where they will host Chelsea, who had knocked out Premier League leaders Liverpool on Tuesday night.

The Foxes saw a long-range effort from James Maddison clip the top of the crossbar and then had the ball in the net in the second half through Kelechi Iheanacho – but the offside flag had already gone up.

With just eight minutes left, Ricardo Pereira headed in a cross from Marc Albrighton to send the Premier League side through.

The remaining quarter-final will be another all-Premier League encounter between Sheffield United and Arsenal.