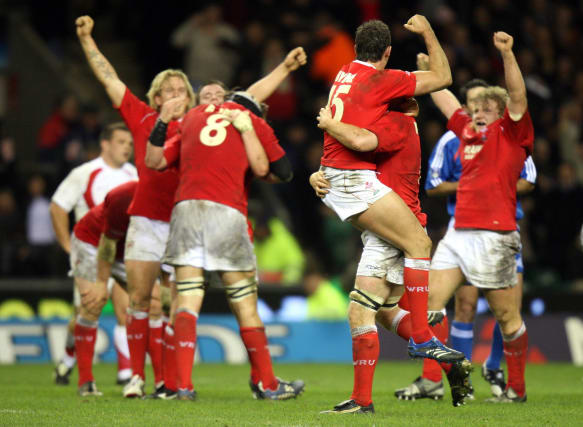 Wales continue their Guinness Six Nations campaign on Saturday when they meet England at Twickenham.

Here, the PA news agency looks at some of their highs and lows in south-west London during rugby union’s professional era.

New Wales head coach Warren Gatland could not have been handed a tougher first game in charge than England at Twickenham, but a line-up containing 13 Ospreys players – Scarlets wing Mark Jones and Cardiff Blues Martyn Williams were the exceptions – claimed a remarkable win. Trailing 16-6 at half-time, Wales hit back through tries from Lee Byrne and Mike Phillips, while James Hook kicked 16 points. It was Wales’ first Twickenham win for 20 years and six weeks later they clinched a Grand Slam.

Wales claimed a dramatic victory that handed interim England boss Stuart Lancaster his first defeat at the helm. Rival goalkickers Owen Farrell and Leigh Halfpenny each booted four penalties as the game seemingly headed for a draw, but Wales centre Scott Williams scored a brilliant breakaway try five minutes from time that Halfpenny converted. Wales held on to win the Triple Crown after coming under relentless late pressure when England wing David Strettle went within millimetres of touching down.

Wales recorded a World Cup win that defied the odds and contributed towards England becoming the first host nation in the tournament’s history to make a pool stage exit. Not only did the visitors overcome a 10-point deficit, they also triumphed despite losing three backs – Liam Williams, Scott Williams and Hallam Amos – to injuries. Replacement scrum-half Lloyd Williams ended up on the wing, and it was his superbly-placed kick that led to Gareth Davies’ key late try, while fly-half Dan Biggar kicked 23 points.

England became the first team to top 50 points in a Five Nations match. Wales led 12-6 with almost 30 minutes gone, but that was the cue for an England onslaught as they scored 21 points in seven minutes. The home side went on to post eight touchdowns, including two for Sale wing David Rees, while fly-half Paul Grayson kicked 20 points as England emphatically completed the first leg of a Triple Crown campaign.

England missed out on the Grand Slam but they secured a Six Nations Triple Crown after Jonny Wilkinson and Will Greenwood pulled the strings during a dominant display. Fly-half Wilkinson amassed 30 points from five conversions, four penalties, a try and drop-goal, with Greenwood, Dan Luger (2) and Tim Stimpson also touching down. Former rugby league star Iestyn Harris scored all of Wales’ points, but the visitors were never in contention. It remains their biggest Six Nations loss at Twickenham.

Wales head coach Gareth Jenkins used a summer trip to Twickenham to field a number of fringe candidates for World Cup selection in France later that year, but it backfired spectacularly as England romped home in record-breaking fashion. Number eight Nick Easter claimed four of England’s nine tries, with Lawrence Dallaglio and Jason Robinson also among the scorers, with Jonny Wilkinson passing 900 international points as Wales wilted in a temperature of 30 degrees.