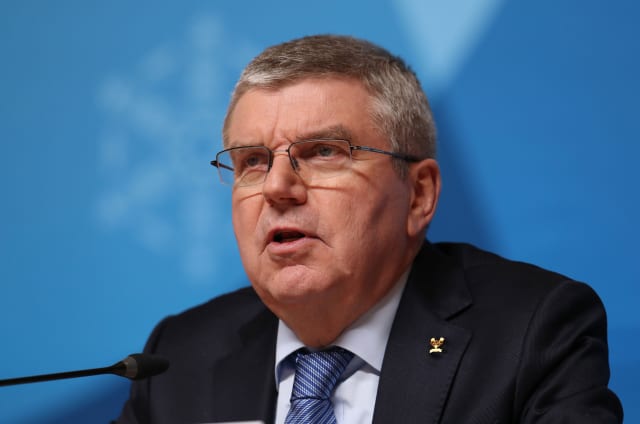 International Olympic Committee president Thomas Bach has admitted the coronavirus outbreak has made it a “challenging” time for the movement but refused to speculate over the extent of the threat to Tokyo 2020.

Speaking after the second day of the IOC executive board meeting in Lausanne, Bach insisted: “I can tell you that today… neither the word ‘cancellation’, nor the word ‘postponement’ was even mentioned.

“Of course we are a responsible organisation and this is why we have a joint-task force which is having regular meetings, but we are not speculating on any kind of future developments.”

However, Bach did concede that the ongoing cancellation of a number of Olympic qualification tournaments around the world had led to some logistical and scheduling concerns.

He added: “We have challenges now with qualifications and you know the many measures we have been under-taking.

“This is challenging, yes, but I must also say I’m pretty proud of the Olympic movement for the great solidarity and flexibility everybody has shown so far to address these challenges.”

Anson said a planned preparatory trip to Tokyo, with around 55 people travelling, was still set to go ahead as the BOA received information from “every possible source” in a “rapidly evolving situation”.

Anson told BBC Sport: “It is not affecting our plans in any way, in that we are absolutely focused on getting the team to Tokyo for the Olympics in July and everyone is obsessed with that, that is the number one focus.

“It’s obviously a rapidly evolving situation, there’s a lot of uncertainty about where it goes. So our assumption is the Olympics is going to happen, but at the same time we are making sure we are aware of what is going on in the world.”

Meanwhile Rory McIlroy, who is planning to make his Olympic debut in Tokyo, said he would have no concerns about travelling if he got the green light from health officials.

Speaking to reporters ahead of the Arnold Palmer Invitational at Bay Hill, McIlroy said: “It’s something that we’re trying to stay on top of.

“If the organisers and the Olympic Committee believe it’s safe enough that athletes can go and compete in the Games then you have to take their word for it.”

The PA news agency understands the Premier League has written to each of its 20 clubs regarding the latest contingency plans for combating the spread of the virus.

It is understood the league’s current message is ‘business as usual’ but that it has advised clubs to increase hygiene levels at stadiums and training grounds, cut down on non-essential visitors and keep face-to-face meetings to a minimum.

Uncertainty over Covid-19 was illustrated on Wednesday by Saracens saying Mako Vunipola had not displayed symptoms of the virus and was available to face Leicester this weekend, despite England having ruled him out of their Six Nations clash with Wales.

The loosehead prop, having flown back from Tonga via Hong Kong, did not join up with Eddie Jones’ squad this week ahead of Saturday’s Six Nations match against Wales at Twickenham.

The Rugby Football Union on Tuesday said that while Vunipola was “not sick”, it was “on medical grounds” that he was not in the camp, and it was understood the prop was in self-isolation as a precaution.

England have revealed that their camp environment influenced the decision.

“Our medical team looks at our team environment, not other people’s, and that’s the advice we followed,” assistant coach Steve Borthwick told BBC 5 live.

“We are a camp-based environment and we stay in together 24 hours a day effectively.”

However, Saracens released a statement on Wednesday which said of Vunipola and his brother and team-mate Billy, who also made the trip: “Neither Billy or Mako have displayed symptoms of the coronavirus (Covid-19) and on their return to London were assessed by the club’s medical staff.

The statement added: “Saracens will continue to follow the Public Health England and World Health Organisation regulations surrounding coronavirus and the medical staff will be closely monitoring Billy and Mako on a regular basis.”

The Asia Sevens International, which was set to take place on April 25 and 26 and serve as a test event for rugby sevens at the Tokyo Olympics, had been cancelled due to concerns relating to the virus.

A women’s golf event in Abu Dhabi which was due to start on Friday has been postponed on similar grounds, while Italy’s Francesco Laporta has been forced out of this week’s Qatar Masters after being faced with two weeks’ quarantine on arriving in Doha.

The Coppa Italia semi-final between Napoli and Inter Milan, which had been scheduled for Thursday evening, has become the latest fixture in Italy to be postponed because of the outbreak while there are reports that Serie A could be ordered to play all of March’s matches behind closed doors.

Cycling outfit Mitchelton-Scott has decided to withdraw its teams from competition until March 22.