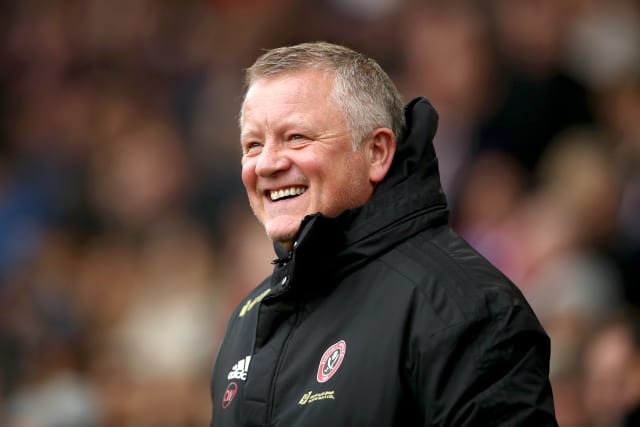 Chris Wilder believes Sheffield United are in a “fabulous position” at this stage of the season following their 2-1 win over Reading to progress to the FA Cup quarter-finals.

Billy Sharp scored an extra-time winner at the Madejski Stadium as the Blades squeezed through to the next round, to reach their first quarter-final since 2014.

David McGoldrick had put the visitors into an early lead, but his header was cancelled out when George Puscas converted a spot-kick just before the half-time break.

“We’re in a fabulous position,” Wilder said when asked about Sheffield United’s season.

“To get 40 points at this stage of the season with 11 games to go is a great achievement from a promoted side, and to round that off tonight, putting in a performance that wasn’t free-flowing, that was difficult, but to get the job done and to find a way to win a game of football was great from our point of view.

“We’re in good nick, we’re in a great position and we’ve got all to play for and I honestly don’t know where the team can take this season for what they’ve done so far has been great.”

Wilder avoided saying Champions League qualification was the target, with the Blades five points behind fourth-placed Chelsea and with a game in hand, but insisted his squad will continue to give their all.

He said: “I can’t see them backing off, I won’t allow them to back off and they’ve got a hunger as a group and a desire to go on and attack the next game.

“From the Premier League point of view, the expectation level has gone up but it’s still a hugely competitive division and we’ve got a really tough game on Saturday to overcome.”

Reading manager Mark Bowen wants his side to be more consistent as they aim to move into the top half of the Championship.

When asked how he motivates his side, the Royals boss said: “Because you’re putting demands on them, it’s as simple as that. It looks highly unlikely although not impossible (the play-offs), but we’ve got to set ourselves goals.

“It’s alright getting pats on the back for individual performances, but as a club and as a group we’ve got to make sure that we’re more consistent to get results and that consistency marries itself with getting higher in the table.”