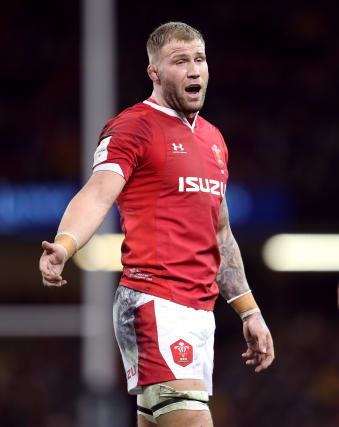 Ross Moriarty has no doubt that Wales will need to meet England head-on in the physical battle at Twickenham this weekend.

Eddie Jones’ team outmuscled Ireland with an enviable show of brute-force and power 10 days ago.

It was a clear sign of what Wales can expect when they go in search of a first Six Nations win on English soil since 2012 and avoiding a third successive loss in this season’s tournament.

“We know if you don’t match England physically then you have got no chance,” said former England Under-20 international Moriarty, who is set to win his 45th cap on Saturday.

“As a pack and back-line we have to go and meet them, especially in their back-yard. That’s what we will be looking to do.

“They pride themselves on having a big and physical pack with a few big backs, so we know what is coming. It’s no different to any other time we have played against them.

“You want to put your marker down early and keep the crowd quiet, especially at Twickenham. That’s a big thing for us.

“It’s great when we play at home as we get the crowd on our side, and it’s the same for them when they are in their own back-yard. It’s not nice when someone comes in and ruffles up your feathers.

“Getting stuck into people physically is my bread and butter, so I will definitely be trying to do that from the start.

“For me, every time I go on the pitch it’s personal, whether you are playing Italy, France, Ireland or Scotland.

“It might be a little bit more for England because we know how much it means to everyone. No-one wants to see us lose. We want to win every game. It doesn’t happen every week, but we are looking forward to it.”

But the 25-year-old is now maintaining a proud family dynasty that saw his father Paul – who was also a rugby league international – and uncle Richard both play for Wales.

“I took it as an opportunity which I grabbed with both hands,” added ex-Gloucester forward Moriarty, on his time in England colours.

“I only lived in England for two years, and then I moved back to Morriston (near Swansea) until I was 16 and then moved to Gloucester.

“My sister was the same as me – born in England and grew up there, but just for four or six years. We had schools in Wales, and my best friends are from Morriston and Swansea.

“I definitely consider myself Welsh, even though I played for England. That was more about the opportunity they gave me and the coach’s belief in me.”

“Sam was in the academy when I was at Gloucester, but he didn’t really get a look-in,” Moriarty said.

“I think he had quite a few injury problems, so he moved to the Ospreys. He took an opportunity in Wales, and that has got him into the England team where he has done very well.

“I played against Tom quite a few times with Sale when I was at Gloucester. He was a young pup at the time, but you could tell he had a lot of potential, and now he’s showing it in an international shirt.”