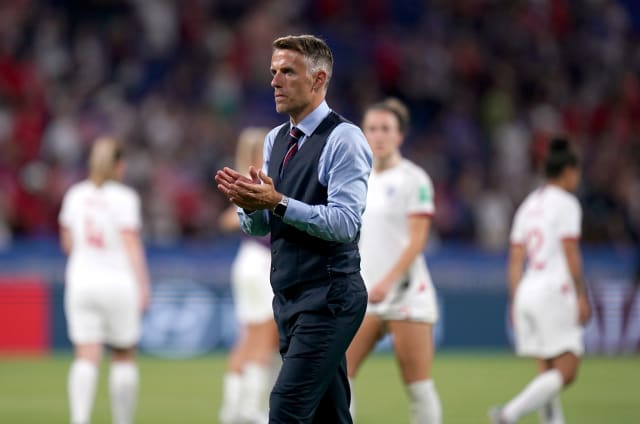 England Women head coach Phil Neville does not want his players to dwell on what might have been when they line up against the United States in the SheBelieves Cup on Friday.

The Lionesses suffered a 2-1 defeat in the 2019 World Cup semi-final at the Stade de Lyon, where England captain Steph Houghton had a late penalty saved and the USA then went on to lift the trophy.

Neville, though, maintains the current squad, which has an emphasis on youth looking ahead to Euro 2021 on home soil, should focus on the positives of how close they came to achieving something special.

“We haven’t thought about it (the semi-final),” Neville told Sky Sports.

“The only thing that we stressed to the players over the last two or three days was that there was a lot of opinions, a lot of experts commented about the difference between the two sides back in June, but if you watch the game back with pure balance, we played really well.

“If we had just upped our quality in terms of our possession, which is the thing that we hung our hat on.

“If the quality is better on the ball, then we have got a great chance of beating them – and that’s what we said to the players: don’t read or be influenced by what you thought happened in that semi-final.

“We controlled the play, we had the most possession, we created some really good chances and ultimately, it was a toenail, it was a missed penalty away from being something really special.

“That game is gone, this is a new team, a new season with a new clear direction where we are going.”

Neville has handed a first senior call-up to West Ham defender Grace Fisk, while the form of Chloe Kelly in the FA Women’s Super League has earned the Everton striker a recall.

Following a low-key end to 2019, Neville hopes the matches against the USA, Japan and then Spain can help build some momentum.

“We were all disappointed with our performances over the six games – even the ones that we won against Portugal and Czech Republic,” the former Manchester United and Everton defender said.

“Without a shadow of a doubt we were a big step down from the levels that we require and the levels I expect.

“To beat the USA, Japan and Spain you need unwavering belief, you need courage on the ball.

“I want them to go out there and enjoy themselves because that is a big part of what we have tried to do.”