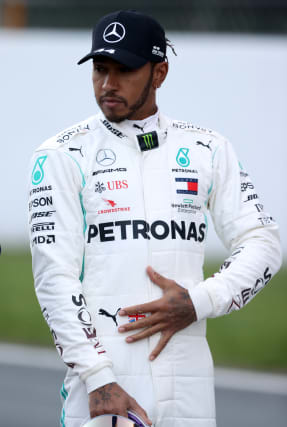 By the end of this year, Lewis Hamilton might have equalled a sporting record that many thought would stand the test of time.

As Michael Schumacher celebrated his seventh Formula One World Championship in 2004, few would have foreseen that 16 years later a council-estate kid from Stevenage would be within striking range of the German’s remarkable achievement.

Yet, as Formula One’s travelling circus heads to Melbourne for the traditional season-opening Australian Grand Prix a week on Sunday, Hamilton will start as the overwhelming favourite to match Schumacher’s tally, and in doing so, write his name into motor racing immortality.

Even for the ambitious Hamilton, who was aged just 10 and wearing a borrowed dinner jacket when he first asked then-McLaren boss Ron Dennis if he could drive for him, he would never have thought such an accomplishment to be possible.

Hamilton’s latest title rarely looked under threat after he galloped to victory in six of the opening eight races last year.

Ferrari’s pre-season promise waned. Valtteri Bottas proved he is not on Mercedes team-mate Hamilton’s level. And although Max Verstappen can put a case forward as the pound-for-pound driver of the year, his Red Bull machinery was an inconsistent challenger.

Just as he did in 2017 and 2018, Hamilton clinched the championship with two races to spare.

Hamilton spent the ensuing two months out of the spotlight and on the slopes of his now customary winter retreat in Colorado.

He missed out on BBC Sports Personality of the Year and a knighthood for at least another 12 months before he emerged at testing in Barcelona leaner than at this stage last year. Hamilton might now be 35 – only Kimi Raikkonen is older than him on the Formula One grid – and have 13 seasons under his belt, but he appears hungrier than ever, too.

And driving for Mercedes, Hamilton occupies the number one seat in the sport’s dominant team.

In testing, complete with an innovative steering wheel which looks set to provide them with a fresh edge over their rivals, Mercedes clocked the fastest time and completed the most laps.

So, can Hamilton be beaten this year?

“You have to get the best out of yourself and be the best you can be because Lewis’ level is incredibly high,” Nico Rosberg, the only driver to beat Hamilton since 2013, told the PA news agency.

“That takes extreme dedication, extreme hard work and everything that goes with it.

“Of course, Lewis is the absolute favourite to win the championship, but I have really high hopes that we can be in for a thrilling season.”

The man seemingly best placed to take the challenge to Hamilton is Verstappen. The 22-year-old Dutchman won three times last season, but he will be reliant on Red Bull taking a major stride over the winter.

And what of Ferrari? The Italian giants are starved of championship glory – Raikkonen was the last driver to deliver a title for the Scuderia in 2007.

Sebastian Vettel was hired to end that title drought but the German has not delivered. Charles Leclerc is now viewed by the Ferrari hierarchy as their driver for the future. But at just 22 and in only his third full year, can Leclerc really take the challenge to Hamilton over the course of a season?

In identical machinery, Bottas might not be ruled out for a title tilt. Yet the Finn’s statistics as Hamilton’s team-mate over the past three seasons should point to the contrary. Since joining as Rosberg’s replacement in 2017, Bottas has won seven times. During the same period, Hamilton has 31 victories and a hat-trick of world titles.

Those triumphs have edged Hamilton to within one of Schumacher’s championship tally and seven wins short of the German’s victory record.

History beckons for the boy from Stevenage and he is ready to grasp it with both hands.