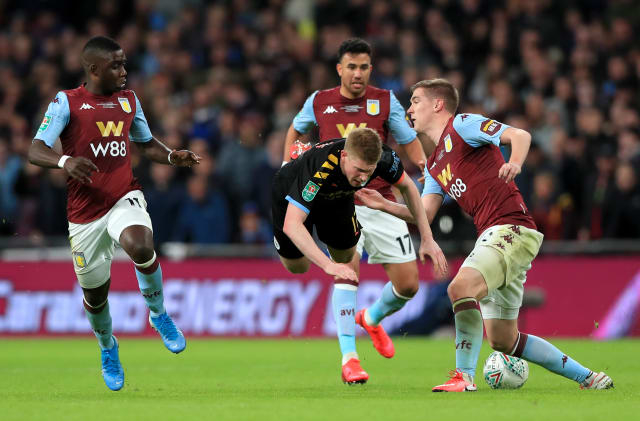 Kevin De Bruyne is an injury doubt for the Manchester derby after missing City’s FA Cup win at Sheffield Wednesday through injury.

Manager Pep Guardiola said the Belgian landed awkwardly on his back and shoulder in the latter stages of Sunday’s Carabao Cup final victory over Aston Villa at Wembley.

The 28-year-old did not travel to Hillsborough for Wednesday’s fifth-round tie, which City won 1-0, and Guardiola is unsure if he will be fit for Sunday’s Premier League clash with Manchester United at Old Trafford.

Speaking in his post-match press conference, Guardiola said: “Kevin had a problem here (points to shoulder). He was not fit. In the last game, the last minutes he fell down in a bad position and had a problem in his back. We don’t know how long (he will be out). Hopefully not much.”

Asked if he would be fit for the derby, Guardiola said: “I don’t know.”