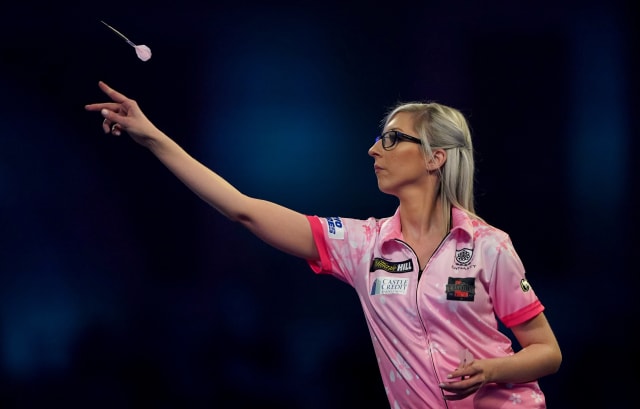 Fallon Sherrock is backing herself to produce another landmark victory when she competes in the UK Open this weekend.

Sherrock made history by becoming the first woman to win at the World Championships last December, as she knocked out Ted Evetts and Mensur Suljovic, and then went on to compete in the Premier League in February, becoming the first female to do so.

Now she heads to Butlin’s in Minehead battling with Lisa Ashton to become the first woman to win a match at the tournament since Deta Hedman in 2005.

Hedman won two matches that year and Sherrock thinks the 15-year drought will end this year.

“I would love to win again, the fact that there are two women in it this year, with me and Lisa playing in it, I fully believe that is going to get broken,” the 25-year-old told the PA news agency.

“I genuinely feel like 2020 is going to be the year where there is a women winner. We are both great players, I can see one of us if not both of us winning.”

For Sherrock it is another step into the limelight, having become a global star following her exploits at the World Championships.

Along with the Alexandra Palace and the Blackpool Tower Ballroom, Butlin’s at Minehead is one of the iconic locations on the PDC Tour and Sherrock is looking forward to being part of a tournament that she usually watches on television.

She will meet Kyle McKinstry in the first round on Friday and will have two more matches afterwards if she is to join the big guns in round four.

“I am really excited, I can’t wait to play at the UK Open,” she added. “I had to qualify for it, so I am just so excited, I watch it on The TV every year and now I get to participate in it and go down there and be part of it. I just want to go now!

“I can’t wait to get down there and embrace the atmosphere.

“The format is something that I am going to be used to from playing in the BDO, that is how we play.

“Then you’re on again so soon, you are playing a fair amount of games in one day. I am looking forward to it.”

Her run at the Alexandra Palace saw her handed a qualifiers’ spot at the Premier League in Nottingham last month and she created more headlines by drawing with Glen Durrant.

She had the throw in the final leg to get the win, but only looks back at her evening with pride.

“I loved every minute of it, it was great,” she said. “I am not really disappointed because Glen raised his level at the end and I had to score big just to match him.

“I didn’t win but I didn’t lose and the aim was not to lose.

“It was pretty much the same atmosphere as at the Worlds, the support was great, they were a bit more respectful to Glen to what they were at the Alexandra Palace to Ted and Mensur.

“I enjoyed every minute of it, it was a great atmosphere and a great experience, I’d love to do it again if I have the opportunity.”