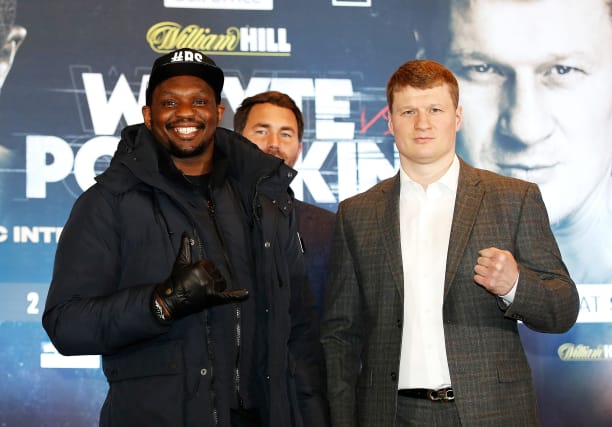 Dillian Whyte has banished any thoughts of fighting for the world heavyweight title as he insists his focus is squarely on the challenge of veteran Russian Alexander Povetkin.

Whyte was last December reinstated as the mandatory challenger with the WBC, which says his shot at the crown currently held by Tyson Fury will take place “on or about February of 2021”.

In the meantime, rather than accept a bout against a low-key opponent, Whyte will next take on former WBA champion Povetkin, who has only lost to Wladimir Klitschko and Anthony Joshua in a 38-fight professional career.

Speaking to promote their May 2 fight at the Manchester Arena, Whyte said: “I go one fight at a time.

“I know all this stuff is floating around in the background but Povetkin is a dangerous guy, you can never afford to overlook him.

“He’s going to want to come and fight and leave it all on the line, that’s just in his DNA, it’s one thing that’s very similar between me and him.

“We’ll see what happens on May 3 and we’ll have a chat about Tyson Fury, but for now I’ll put it on the back burner and just focus on Alexander Povetkin for the next eight weeks.”

Whyte has earned a reputation for consistently taking on top-tier opponents and risking his status with the WBC, which restored the Londoner’s position as its mandatory challenger after a doping violation charge was dropped.

He first fought in an eliminator for the belt when he defeated Dereck Chisora in December 2016 but the opportunity to box for a world title continues to elude him and will do so for at least another 11 months.

Whyte’s promoter Eddie Hearn told the PA news agency: “I feel like he hasn’t been treated correctly by the WBC.

“He almost got suspended and fined before his case was even properly heard, that was completely thrown out, he never even failed a drugs test. Why have they continued to keep that delay on him when he’s completely innocent?

“It’s frustrating and he’s had to wait another year longer than anticipated. By the time it will come round it will be like nearly 1,000 days (since he became mandatory challenger). It’s incredible.”

Hearn is currently in negotiations with Fury’s handlers about a potential blockbuster fight with Anthony Joshua, another of his clients who handed Whyte his only defeat in the paid ranks in December 2015.

Hearn said: “Dillian won’t always feel like he’s in a good spot but the worst case scenario is he fights the winner of Fury against Joshua. So you’re going to have another undisputed fight between two Brits, which is incredible!”

The 40-year-old Povetkin represents another stiff test, and Hearn added: “I’m still not overly happy about the fight, I’d rather he just sat and waited.

“But he’s not prepared to do that, he will always give the fans great entertainment and May 2 against Povetkin is going to be a monster fight. This is a complete 50-50 fight.”