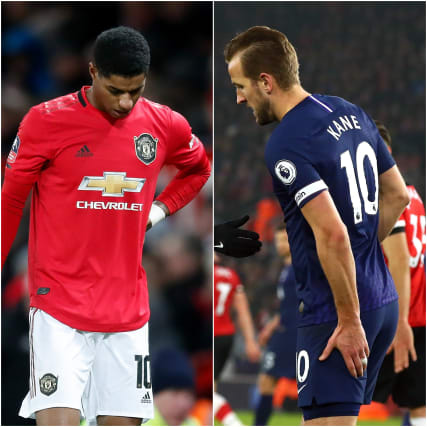 Harry Kane and Marcus Rashford are on track to be part of England’s Euro 2020 squad according to Three Lions boss Gareth Southgate.

The year could scarcely have got off to a worse start for the national team manager as first Tottenham striker Kane ruptured his hamstring tendon on New Year’s Day before Manchester United forward Rashford suffered a stress fracture later in January.

Both are now in a race to be fit for the finals, which England go into as one of the favourites owing to home advantage during the group phase and the final four if they make it, and off the back of their run to the World Cup semi-finals in 2018.

Speaking at the 2020-21 Nations League draw, where England were grouped with Belgium, Denmark and Iceland, Southgate said: “All the information we’ve had is that (Kane) is progressing well.

“We know Harry will give himself the best chance of being fit, following everything to the absolute letter. I’m not surprised by that news and it’s good to hear.

“I’m realistic. I think with Harry and Marcus Rashford, they’ve both had serious injuries, long-term injuries but both of them will do everything within their power to get themselves fit and ready and available for us in the summer.

“The first priority for both of them is to get back playing for their clubs. Then all being well they’ll be available for us in the summer.”

Southgate did not rule out an emergency call to Leicester striker Jamie Vardy, who retired from international football in the summer of 2018.

“We’ve got 70 players playing so why would we rule anybody out?” he added.

“That’s always the stance we’ve taken and I don’t see any reason to change that, unless we get another 50 English players playing in the next months.”

Asked if he had spoken to Vardy yet, he said: “I’ve not spoken to players per se across the period but I’ve always said that door has never been closed.”

Another possible concern for Southgate would be goalkeeper Jordan Pickford.

The Everton man was at fault as he failed to keep out a low shot from Manchester United’s Bruno Fernandes last weekend, a second error in successive home appearances.

But Southgate said: “His performances for us, throughout, have been outstanding. I think he has been a key part of some big, big results that we have had, I think that is clear to everybody, but in goal, you are always under the spotlight.

“I don’t think he will be shying away from that and he has been, all the time I have known him, a very resilient character and he has got a very experienced manager at his club now (Carlo Ancelotti) to help with it, so I am expecting him to bounce back.”

The Nations League draw reunited the Three Lions with Belgium, who beat them twice at the 2018 World Cup.

Arguably both matches were dead rubbers, with defeat in the final group game effectively putting England on what appeared to be an easier route to the final, before the teams met again in the third-place play-off.

Belgium coach Roberto Martinez said: “This is completely different – a really nice opportunity to welcome England to Brussels, and then going to Wembley is always a very special occasion for all the fans and us as a team.”

Martinez believes in Manchester City playmaker Kevin De Bruyne he has one of the most in-form players in the world at his disposal.

“He’s been valuable for a long time now,” the Spaniard said.

“He had a little bit of a stop-start season after the World Cup but KDB has been in the form of his career for four years now.”

England also face a first meeting with Iceland since they were knocked out by them at Euro 2016, a match which proved to be the end of the road for Roy Hodgson. Their other group opponents, Denmark, are due to play England in a friendly at Wembley on March 31.

Wales and the Republic of Ireland were drawn together, just as in the 2018-19 Nations League, with Finland and Bulgaria completing Group B4.

Scotland, whose coach Steve Clarke did not attend as it was deemed an unnecessary risk amid the coronavirus outbreak, will face Israel, who they also face in a Euro 2020 play-off semi-final later this month. The Czech Republic and Slovakia complete the group.

Northern Ireland will face Austria, Norway and Romania in Group B1.