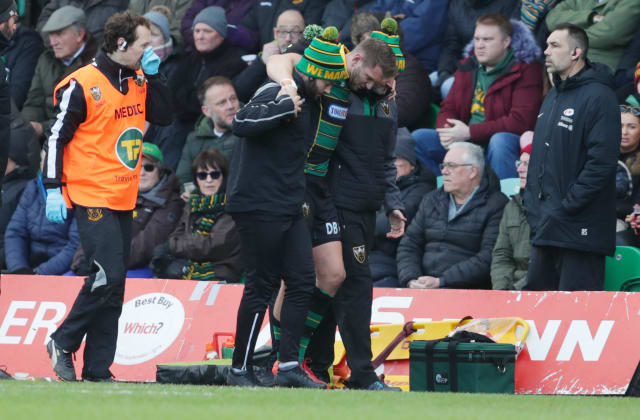 Sam Warburton says that Wales fly-half Dan Biggar is “ticking all the boxes” in his bid to be fit for Saturday’s Guinness Six Nations clash against England.

His fellow Wales number 10s Gareth Anscombe, Rhys Patchell and Owen Williams are all currently sidelined, with Cardiff Blues’ Jarrod Evans seemingly set for a first Six Nations start if Biggar does not recover in time.

But former Wales captain Warburton, who is now part of Wayne Pivac’s coaching staff as a technical adviser, has issued a positive fitness update on Biggar.

“He is looking good,” Warburton said. “The initial signs are positive. He doesn’t need a scan.

“It puts our team selection on hold for a while because we have to wait to see how he turns up tomorrow.

“He’s going to train and do stuff with the physios. But every day so far, the feedback from the physios has been good.

“He is ticking all the boxes he needs to. He’s on a good course, so hopefully, with no hiccups, we will have some good news.

“There are no guarantees, but we are confident at this stage. There is a hurdle every day – the training becomes gradually more intense and will climax towards the end of the week.

“So if he can pass that, then all good. We’re taking it day by day, but the first two days have been all good.”

While Biggar continues his recovery, wing George North is training and progressing after he failed a head injury assessment during Wales’ defeat against France last month.

And Liam Williams, who has not played since Wales’ World Cup quarter-final victory over France last October due to an ankle injury, could be in the selection mix for Twickenham along with back-row forward Josh Navidi, who has recovered from a hamstring problem.

On North, Warburton added: “He’s good. This is why the fallow weeks (in the Six Nations) are key. You can’t play five international games in a row at this level.

“The Union (Welsh Rugby Union) are taking his return to play slowly. He’s still going to see somebody completely independent of the Union this week.

“His selection will be subject to that to make sure he’s absolutely right. We are taking every precaution possible.

“He’s passed all the initial tests, but just for extra security, he is going to see someone independent this week to get the final green light.

“Liam is back in full training. He will hopefully be in contention to start. This (Twickenham) is the sort of cauldron he would love to be thrown into.

“Josh is back in full training and is available again. From a coaching and back-row perspective, that physicality, that dynamism, ball-carrying ability, work on the floor – he has been a big player for us in the past few years.”

Wing Hallam Amos, though, will miss the rest of the Six Nations due to a knee injury.

Amos was hurt during Cardiff Blues’ recent Guinness PRO14 clash against Benetton and will undergo knee surgery that is expected to keep him sidelined for the rest of this season.

Wales are out of the Six Nations title race following successive losses to Ireland and France, while they have not claimed a win in the tournament at Twickenham since their 2012 Grand Slam season, when Warburton was skipper.

“I remember in 2012 when we won, Ryan Jones said to myself, Dan (Lydiate) and Taulupe (Faletau) to enjoy it because away wins at Twickenham are rare,” Warburton said.

“I thought: ‘Ah don’t worry, we’ll come back and do this again’. But you learn it the hard way, it’s a very tough place to go. I only had two wins in my whole career there.”