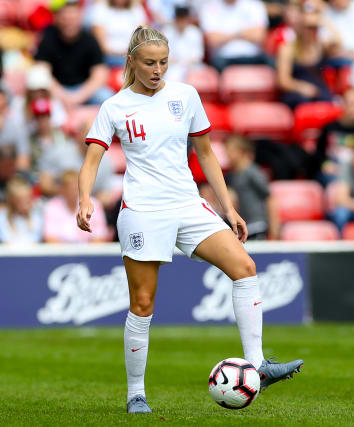 Defender Leah Williamson maintains England will not be on a revenge mission when they line up against the United States in the SheBelieves Cup on Friday.

The Lionesses will face the world champions for a first meeting since the bitter disappointment of last summer’s semi-final defeat in Lyon.

Head coach Phil Neville is determined to build momentum again after a low-key end to 2019, which saw three defeats in six matches before a welcome win against the Czech Republic.

England won the invitational SheBelieves Cup tournament last year and Neville has selected a youthful squad for this trip as focus turns towards Euro 2021.

Williamson, 22, feels the experiences gained from upcoming round-robin games against the USA, Japan in New Jersey and then Spain in Frisco, Texas can only help stand the Lionesses in good stead for the challenges ahead.

“I don’t think anybody has forgotten what happened in the summer – it was the biggest game that some people would have played in their careers and to come off of that worse than them, it is never a nice thing,” said Arsenal defender Williamson, who was on the bench for the 2-1 semi-final defeat.

“This match, though, is obviously completely different. The benefit of playing them in a friendly tournament is that the more times you do play against the top teams, the more it just becomes about the football and what happens on the pitch.”

Williamson told the PA news agency: “It is a great opportunity really. I don’t think there is any sort of revenge planned.

“It is just about focusing on us, and the benefit for us is when that next big game comes around, we will be ready.”

Lucy Bronze misses the USA trip with a calf injury, while Arsenal forward Beth Mead is sidelined by a knee problem.

Six of the current squad competed for England at the Under-20 World Cup in 2018 as Neville has an eye on next year’s showpiece finals.

Williamson feels integrating fresh talent into the group can only prove positive, both on and off the pitch.

“The fearlessness they have, being the unknown to them, it is also the unknown to everybody else – sort of like having a few secret weapons in your group,” she said.

“We have seen the talent that they have, they know that within themselves, and it is exciting.”

The Arsenal defender added: “There is a real fresh feel about the team, it is all positive steps in the right direction.”

With women’s sport now very much in the spotlight, Williamson hopes the players can use the added sense of scrutiny and expectation as a springboard for more success.

“I like the challenge, you want to play well for more than one reason,” she said.

“If that means we have to take a little bit more of the pressure and criticism as well, then so be it because that is what we need.”