Jose Mourinho: ‘Privileged one’ Troy Parrott will be on bench against Norwich 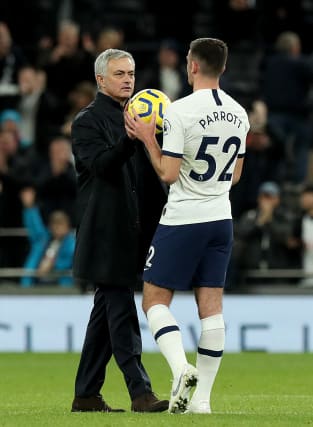 Tottenham boss Jose Mourinho has revealed that Troy Parrott will be on the bench against Norwich in the FA Cup, but is aware that the teenage striker still has a lot to learn.

There has been plenty of clamour from Spurs fans for the 18-year-old to be involved in the first team following injuries to Harry Kane and Son Heung-min, but Mourinho has continually insisted he is not ready.

After making a brief appearance from the bench in Sunday’s 3-2 home defeat to Wolves, and then scoring in a 45-minute appearance for the under-23s on Monday night, Mourinho confirmed he will again be involved against the Canaries.

But the Portuguese has also warned that Parrott is far from the finished product.

“We’re taking very good care of him and we cannot tell you obviously every detail,” Mourinho said.

“We’re taking good care of a young player and also taking care of a young boy in society, in life, in private life. That’s a process. He’s 18. One month ago he was 17, so he’s not even close to being 19.

“On Monday we decided it was good for him to play but we decided before the game, with the relations we have with youth football, it was only for 45 minutes, to give him some match time but not 90 minutes because he’s going to be on the bench.

“He has qualities. He has potential but he’s not an end product. He has a lot to learn, a lot to develop at every level.

“He’s going to be on the bench again (on Wednesday). A few minutes he played already, he already has two Premier League appearances which is not normal for an 18-year-old kid. He’s a privileged one.

“I think he understands the privilege of being part of the first team, training every day, learning with experiences players and coaches, with very people also in the academy. He’s a privileged one. Step by step.”

Spurs’ difficult season could take another hit on Wednesday if they lose in the FA Cup to Norwich, shutting off another avenue of potential silverware for Mourinho in his first few months at the club.

The fact that some fans are pinning their hopes on a teenager who has yet to complete a full 90 minutes of senior football for Spurs shows how bad things have got.

Mourinho has already said on numerous occasions recently that he cannot wait for this season to end as he tries to make his own stamp on his squad, but he has ruled out a summer overhaul.

“So I am not thinking of an overhaul. Of course we need to make our squad better, that is obvious.”

Mourinho is renowned for winning silverware early in his spells at most of his previous clubs, but says he would not consider this season a failure if he did not secure a trophy.

“No. Because I come in mid-season, because I come with the train midway, because of so many difficult circumstances I wouldn’t feel it at all,” he said.

He will be without Hugo Lloris for the game against Norwich, though the goalkeeper is expected to return for Saturday’s game at Burnley.

Erik Lamela is expected to return, along with Ryan Sessegnon, but big-hitters Kane, Moussa Sissoko and Son are still missing.

“I am expecting good news before every match,” Mourinho said of Lloris.

“(On Monday) I was not sure that he couldn’t play (on Wednesday). He can’t. I’m going to wait for good news for Saturday, I hope he can.

“It’s not the kind of injury where we know he’s not ready to play for three, four or five weeks.