Heather Watson: Happiness on and off court has transformed me 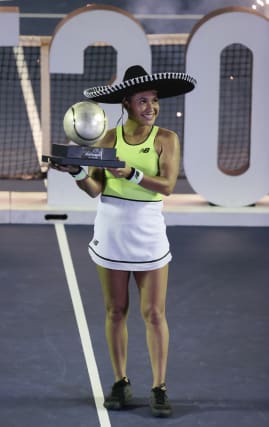 Happiness on and off the court has transformed Heather Watson from feeling like “a failure” to a title winner and top-50 player again.

The 27-year-old won her fourth WTA title and first for four years at the Mexican Open in Acapulco last Saturday, beating Canadian teenager Leylah Fernandez in an exciting final.

Watson told the PA news agency: “Moments like this are the reason I put so much into my tennis day in, day out. To hold a trophy and have another title next to my name, for me that’s the best feeling.”

Watson leapt 20 places in the rankings to 49, her highest mark since the summer of 2015, when she came agonisingly close to beating Serena Williams at Wimbledon and seemed destined for many big days ahead.

But, a third title in Monterrey in March 2016 aside, the highs have been few and far between, especially over the last three years, with Watson spending several lengthy periods outside the top 100.

“I’d call it a roller coaster,” said Watson, who cites her relationship with Yeovil footballer Courtney Duffus as a key factor behind her improved form.

“I’ve had a lot of ups and downs in the last four years. The last six to eight months have been amazing for me, I’ve really started doing well again, been happy, loving life. But before that it was a tough time. I’m glad I’m out of that.”

This time last year Watson was in the middle of an eight-match losing run that lasted four months.

“I’m a really happy, bubbly person and it takes a lot for anything to get me down,” she said. “It wasn’t just one thing, it was just constantly being in a bad place.”

Watson, like many tennis players, admits she struggled not to connect her feelings of self-worth to her results, and unhappiness in her personal life compounded things.

“You are what you do so, when you’re not doing well in tennis, you feel like a failure because that’s all you’re doing every day.

“At one point I was wondering if I was even going to win a match. I had zero belief. But that was because I didn’t have much confidence in myself off court either.

“Now I’m very confident in myself as a person, very happy, getting that balance right between working hard, making those sacrifices but also enjoying my life.”

Watson’s celebrations after lifting the trophy in Acapulco involved beach and pool time with mum Michelle before she moved on to Monterrey, where she was due to play her opening match on Tuesday afternoon.

Having more than halved her ranking already in the first two months of the year, Watson is keen to stress she expects more of herself, with bettering the career-high ranking of 38 she set in January 2015 top of the list.

“That’s why I’m still playing,” she said. “I wouldn’t keep playing just to be average. I want to get the most out of myself and my career.

“This won’t be forever, it won’t be for much, much longer, so I want to make the most of it, bring more titles and definitely get a new career high. I feel like 38 is not good enough for me.”