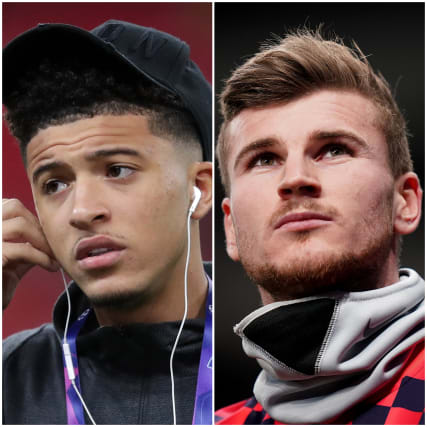 Jadon Sancho could be heading to Manchester United for a record Premier League transfer fee, according to The Daily Telegraph. The paper says the England forward, 19, will cost more than the £89.3 million paid by United for Paul Pogba four years ago.

But the Daily Express says Liverpool  also want to swoop for the teenager and are willing to pay £100m for his signature. The Merseysiders also want to recruit fellow Bundesliga player Timo Werner, with the 23-year-old striker having impressed with 21 goals this season for RB Leipzig.

United are also the latest Premier League club to be linked with Norway striker Alexander Sorloth, who is currently on loan at Trabzonspor from Crystal Palace. The Sun, citing Fotospor, say the Red Devils have been monitoring the former Crystal Palace forward, who reportedly has Sheffield United, Newcastle and Brighton among his other suitors.

Meanwhile, The Times report Burnley defender Charlie Taylor, 26, is being considered by Leicester as a potential replacement if England international Ben Chilwell, 23, leaves the club.

Alex Telles: The Brazil defender and Chelsea target, 27, has rejected a contract extension with Porto, according to The Sun which cites A Bola.

Daniel Sturridge: The free agent, 30, could sign with Aston Villa or MLS team Inter Miami when his ban for breaking betting rules ends in June, The Sun reports.