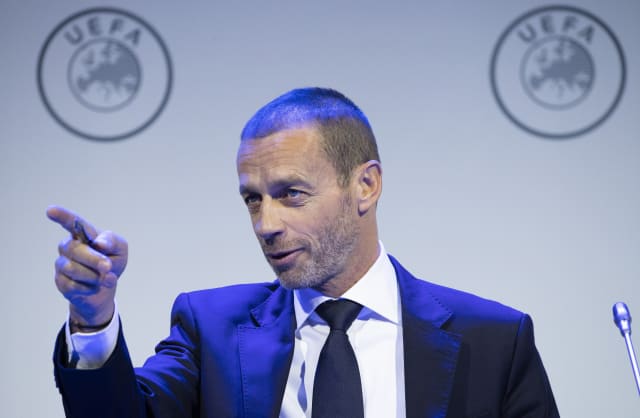 UEFA president Aleksander Ceferin has hinted at reforming his organisation’s rules on racism.

The Slovenian leader of European football’s governing body addressed UEFA Congress in Amsterdam on Tuesday, and spoke of the great commercial and sporting success his confederation had enjoyed in recent years.

But he admitted a huge amount of work still needs to be done, particularly in tackling discrimination.

UEFA has received criticism for not enforcing harsher punishments for racist abuse. The Bulgarian federation was ordered to play one national team match behind closed doors – with a further match suspended for two years – over the abuse directed at England’s black players during a Euro 2020 qualifier in October.

“We must begin by applying the rules we already have. That would be a good starting point. That means applying the three-step procedure. We must not be afraid to do so. Everywhere. No exceptions.

“In the last three seasons, the UEFA disciplinary bodies have imposed 73 partial stadium closures and ordered 39 matches to be played behind closed doors following incidents of discrimination.

“That shows that we are doing what is currently in our power to do. But it also shows what a serious problem it is, and that we need to do more. More, and perhaps differently. So we that can be proud of ourselves once again.”

Ceferin said racism was “a problem in our societies”.

“Football is, above all, a celebration of life, community and unity. It’s an exchange. It’s about sharing,” he said.

“The problem is not on the pitch, where diversity is greater than in any other sport and probably any other part of society. The problem is in our societies. And this has to stop.”

“When purpose over profit becomes profit over purpose, it is time to raise the alarm,”

UEFA’s member associations were presented with the governing body’s financial figures for 2018-19, which showed it had generated almost four billion euros in revenue (just under £3.5bn).

But Ceferin said his organisation must put “purpose over profit”, and talked about the need not to overburden players and supporters with too many fixtures purely to further drive up revenue.

His comments come at a time when world governing body FIFA has introduced a new 24-team Club World Cup competition. The inaugural event is due to take place in China in the summer of 2021.

“When purpose over profit becomes profit over purpose, it is time to raise the alarm,” he said.

“Football is not simply a business like any other. It has a history, tradition and structure that must be respected.

“The football pyramid is delicate and must not be knocked off balance. Certain projects, some devised on other continents with the backing of governing bodies, are particularly worrying.”

Ceferin added: “Supporters are not consumers. Or customers. They are supporters.

“Players are not machines. Or products, or pawns. They are players.

“No football administrator, no matter the size of the ego, should think we are the stars of the game. We are only the guardians of the game.”

The part about “egos” was missing from the draft of the speech sent to media, suggesting it was an off-the-cuff remark from Ceferin. It is likely to be interpreted to refer to FIFA president Gianni Infantino, who has helped drive through the Club World Cup expansion.