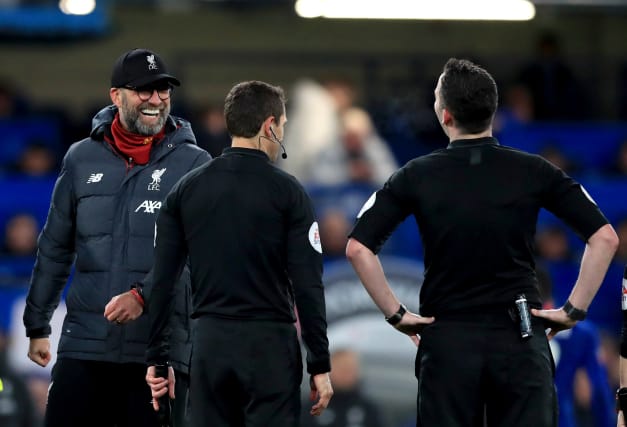 A fortnight ago runaway Premier League leaders Liverpool had lost just twice
in 41 matches in all competitions this season.

Two weeks on and Jurgen Klopp’s Reds have suffered three defeats in their last four games following Tuesday’s FA Cup exit at the hands of Chelsea at Stamford Bridge.

Here, the PA news agency looks at how Liverpool have surprisingly struggled in recent performances.

Saul Niguez scored the only goal as Champions League holders Liverpool suffered a frustrating 1-0 defeat to Atletico Madrid on their return to the Wanda Metropolitano, scene of their final triumph over Tottenham last June.
Niguez fired home after just four minutes and Liverpool failed to muster a single shot on target, as well as losing captain Jordan Henderson to a hamstring injury.

Liverpool ultimately moved to within four wins of a first title in 30 years, but had to come from behind against struggling West Ham. A 21st successive league victory at Anfield matched the Reds’ own top-flight record from 1972, while an 18th consecutive win drew them level with Manchester City’s Premier League landmark set in 2017. The home side led through Georginio Wijnaldum’s early header but trailed 2-1 after goals from Issa Diop and Pablo Fornals and needed a blunder from Hammers’ goalkeeper Lukasz Fabianski to allow Mohamed Salah to equalise before Sadio Mane grabbed the winner.

Liverpool’s unbeaten Premier League season came to a grinding halt as they were deservedly thrashed by struggling Watford at Vicarage Road. Jurgen Klopp’s side were on a 44-game unbeaten run and the champions-elect were
aiming to match Manchester City’s run of 19 consecutive wins – only to be on the wrong end of a 3-0 humbling. Ismaila Sarr stole the show with two goals in six minutes before he laid on the third for captain Troy Deeney, who bullied a Liverpool defence missing Joe Gomez through an injury precaution.

Goals from Willian and Ross Barkley sent Chelsea into the quarter-finals of the FA Cup as Liverpool suffered their third defeat in four games at Stamford Bridge. Seconds after making a brilliant save to deny Willian, Liverpool goalkeeper Adrian somehow fumbled a 14th-minute shot from the same player over the line. Opposite number Kepa Arrizabalaga pulled off a stunning triple save at the other end and Barkley doubled Chelsea’s lead in the 64th minute after running clear from inside his own half before smashing home a right-foot shot.