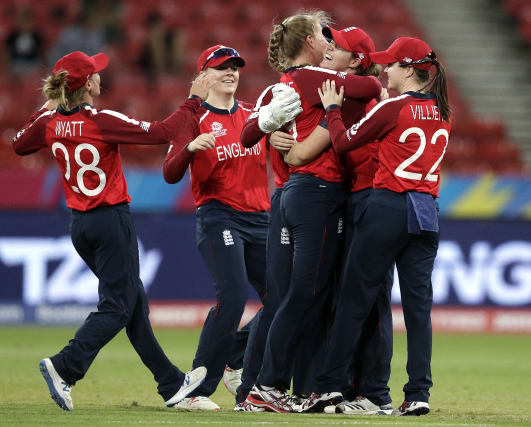 England Women have reached the Twenty20 World Cup semi-finals for the sixth time in the tournament’s seven stagings.

Here, the PA news agency looks at how they fared on their previous visits to this stage.

England won the inaugural tournament on home soil and chased down 164 to win their semi-final against Australia, Sarah Taylor scoring 76 not out and Beth Morgan 46 not out in an eight-wicket win completed with three balls to spare at the Oval.

The final brought a comfortable win over New Zealand which was rarely in doubt from the moment Katherine Brunt wrapped up her four-over opening spell with figures of three for six. The chase of 86 took 17 overs but was completed with four wickets in hand, Taylor finishing 39 not out.

Having failed to advance from their group in 2010, England were back in the business end of the 2012 tournament and their semi-final brought another low-scoring win over New Zealand. Captain Charlotte Edwards top-scored and Taylor was again unbeaten in a successful chase of 94 for three.

They came up just short in the final, Erin Osborne doing just enough to defend 16 off the last over as Australia won by four runs in Colombo. It would not be the last time England suffered at the hands of their Antipodean rivals.

Taylor scored 44 not out in a semi-final rout of South Africa, England chasing 102 with nine wickets and more than three overs to spare.

They could only limp to 105 for eight in the final in Dhaka, though, and were beaten by six wickets as captain Meg Lanning’s 44 led Australia home with almost five overs to spare.

Australia again proved England’s downfall, this time in the semi-final after Lanning’s half-century underpinned a total of 132 for six.

Edwards and Tammy Beaumont put on 67 for the first wicket but Megan Schutt took two for 15 in four overs as England lost by five runs.

Heather Knight’s part-time off-spin picked up a career-best three for nine and half-centuries from Amy Jones and Nat Sciver wrapped up an eight-wicket semi-final win over India.

Australia lifted the trophy for the fourth time in five tournaments, though, dismissing England for 105 despite Danni Wyatt’s 43 as Ashleigh Gardner took three for 22 and then put on an unbroken 62 with Lanning to seal an eight-wicket win.