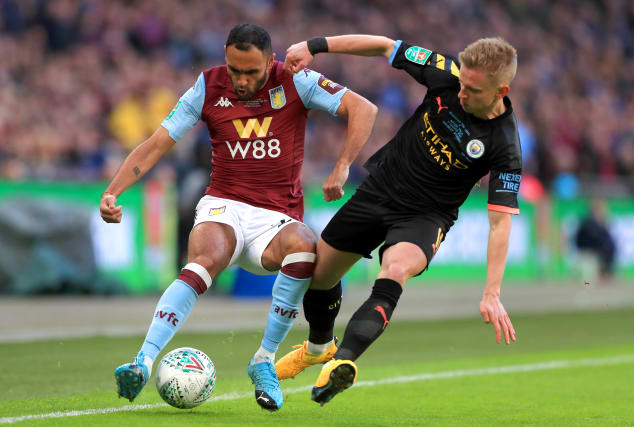 Oleksandr Zinchenko says Manchester City are already thinking about their next challenge after getting their hands on the Carabao Cup yet again.

City won the competition for a third year in succession, and a fifth time in seven years, as they beat Aston Villa 2-1 in a hard-fought final at Wembley on Sunday.

It was also the 11th major trophy of the modern City era, the first of which was the FA Cup triumph of 2011, and they have their sights set on more.

A third successive Premier League title looks beyond them but the FA Cup and Champions League are still very much on the radar.

Left-back Zinchenko said: “It is so important for us to win every title. We are so happy. We have an unbelievable squad and we fight for all titles.

“So everyone is happy, but we should think about the next game because we have one or two other challenges. We want to fight.

“We have to show our class in our performance every single game and then at the end of the season we are going to speak about if it was a good season for us or if it was successful or not.

“We have Champions League and FA Cup as well. We are going to fight for these titles and see what happens. Everyone is focused on the next game and that is it.”

City are back in action on Wednesday as they travel to Sheffield Wednesday in the FA Cup fifth round.

They then have Premier League games against Manchester United and Burnley before their Champions League quest resumes with the second leg of their last-16 tie against Real Madrid at the Etihad Stadium on March 17. City hold a 2-1 aggregate lead from the first leg at the Bernabeu last week.

City had to earn their latest success as relegation-threatened Villa fought back after conceding to Sergio Aguero and Rodri in the first half an hour. Mbwana Samatta pulled one back and it took a brilliant late save from Claudio Bravo, tipping a Bjorn Engels header onto a post, to prevent the match going to extra time.

It was not the first time Bravo had excelled in the competition. Twice in the 2017-18 run he was the hero in penalty shootouts, against Wolves and Leicester, and after missing most of last season through injury, he has played throughout this year’s challenge.

Zinchenko said: “One year ago someone said we have to change the name of the cup, so not Carabao Cup, we should say it is the Claudio Bravo Cup.

“He did it again for us. Thanks a lot to him. Everyone was talking about him in the dressing room.

“It was a battle. Big respect to Aston Villa. They were well organised defensively and it was not too easy.”